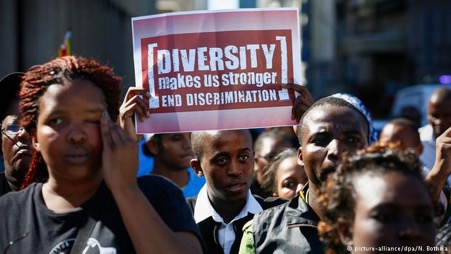 A large majority of white South Africans continue to be silent on racist events that continue to mushroom in South Africa. For years, we’ve watched and seen white South Africa’s false solidarity with black people and absence from involvement on issues affecting blacks. White South Africans expect black people to join movements when the issue in question affects white communities yet remain silent, retreating to leafy or non-impoverished suburbs, when blacks face prejudice, lack of economic access or service delivery. In January 2018, residents from the Thembelihle informal settlement, south of Johannesburg, took to the streets in a service delivery protest demanding housing.

The 1994 ideology of “sameness” that was introduced post-apartheid to bring peace to a much-wounded nation has begun to show cracks, a clear indication that this was, for the most part, a one-sided concord dependent on whose privilege matters most. Despite this jump to illusive unity, black South Africans continue to bear the brunt of poverty, unemployment and inequality compared to white South Africans – all effects of 350 years of oppression and dehumanisation. This tells us that harmony must only be applied when whites are compromised; a disturbing notion. If we assume that in 1994, South Africans both black and whites agreed to adopt this methodology of unity and one human race, how then is the issue of racism only a black person’s concern and ignored when it sows deep, structural divisions that affect black people disproportionately?

More recently, a farmer in Ekurhuleni allegedly forced an employee to drink litres of faeces before attempting to drown him in a septic tank. Another black farm-worker was shot for allegedly using the tractor to fetch lunch in Tarlton, outside Krugersdorp. Last year, two white farmers were found guilty of attempted murder after they filmed themselves forcing a black man into a coffin and threatening to burn him alive in Mpumalanga. In 2016, Penny Sparrow likened black beachgoers in Durban to monkeys sparking a countrywide uproar largely from black South Africans, again we missed the white voice. United in rooting out the cancer that often shows itself unintentionally from some whites in the country, black South Africans were however clear that the word “monkey” is an undignified, dehumanising word.

Earlier this year clothing retailer H&M’s online ad featured a black child model wearing a hoodie written “coolest monkey in the jungle”. This ad received widespread backlash with black South Africans refuting the word ‘monkey’ a word previously used to shame blacks. In this instance, again we see white people in our country conveniently silent. The only time they find their voice is when EFF supporters’ trash the stores of the retailer in the country – suddenly privileged whites want to tell blacks that their actions are wrong without having said anything about the ad. Sadly, this is the reality facing South Africa, a country trying to find healing from past injustices 24 years into democracy.

One can’t help but wonder if the white’s continual silence on racism perhaps stems from the fact that they believe and support it. Or do they remain silent because the sin of Apartheid was done in their name? Or some mistaken belief that we must move on now because Apartheid ended ‘over 20 years ago’. Because in their homes, social circles, and at work, black people remain lesser beings that are  only suitable to be a servant and not deserving to be at the main table. How many of us have heard white people tell black people that they are different to other blacks? What is even more problematic is hearing some white people saying “I don’t think that ad was racist” or “I have seen a worse racist ad” or the false concern of “this act by EFF will affect innocent poor workers.” Any racism affects black people, who are by the way largely poor. If they have seen more racist ads, why then are they silent on this? Is it not that any injustice to any person is unacceptable?

It is time that white people show us their stance on racism. The time has come for them to march against their convenience and join a call for justice. Affording black people dignity is an issue of national concern equally deserving of their spoken words as is with corruption matters.

Black South Africans are tired of the smoke screen and silent reproving of racism. We are done condemning, we are now confronting. It is about time we remind each other of the importance of dignity for all human beings. For our country to rid itself of the chronicle of ‘us’ versus ‘them’ South Africa needs whites to join blacks in confronting racism and any prejudice on the black skin. The best place to start is calling out their peers who continue to belittle black workers in the workplace, the retail space, restaurants and helpers. After all, racism and Apartheid were created by white people. It is up to them to help bring its still-lasting effects down.

White South Africa, black South Africa looks forward to seeing your placards at the next protest against racism. The time is now!

Samantha Kambule is a Communications and Advocacy Project Leader at IJR

Image: Protests against racism and xenophobia in South Africa. Photo by Picture Alliance