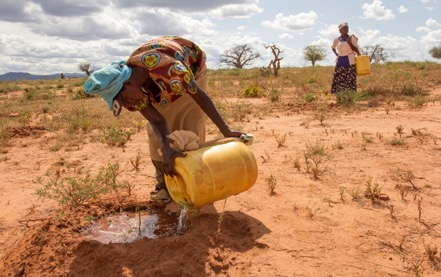 Increasingly more South Africans recognise the seriousness of climate change, and the threats it poses to our survival. The drought that currently affects the Western and Eastern Cape provinces (and the scarcity of water that plagues South Africa, generally) is a consequence of mixed variables that include man-made climate change, i.e. influenced and exacerbated by human activity. Climate change refers to the ongoing trend of change in the earth’s general weather conditions as a result of a rise in the average temperature of the earth’s surface; the rise in average global temperature is due, primarily, to the increased concentration in the atmosphere of gases, known as greenhouse gases (GHG), or carbon dioxide equivalents through the burning of coal, oil and gas. Climate change- and global warming- remains one of the monumental challenges facing the international community, yet still too many perceive the phenomenon as being an exclusively environmental issue. It is, however, also a highly gendered challenge with ramifications that adversely affect specific groups of people.

Climate change is not widely considered as an imminent threat to the welfare of womxn and other vulnerable gender identities. It is not ranked as a priority nor is it universally understood as a threat to the liberation of vulnerable gender groups. We consider- rightly so- gender-based and sexual violence as immediate dangers, and concentrate much of our efforts at dismantling the systems, institutions and attitudes that create and uphold the gender hierarchy. Feminists unanimously agree that patriarchal violence is the foundation upon which our society was built and through which it is sustained. Patriarchy is understood as a system of male dominance that is rooted in violence and sanctified by religious and cultural symbols. It is a society in which men dominate womxn (and other vulnerable genders) through the control of their sexuality, and with the aim to seize, possess, and exploit land and other resources. It can be assumed that man-made climate change is a direct result of the toxic manifestations of patriarchy. As the systems and structures it produces are hierarchical- dividing and disabling gender groups according to rigid cis-heteronormativity- there will be a ‘social pyramid’ of consequences as climate change affects the world. The world we occupy is a vastly unequal one and the consequences of climate change will magnify this inequality. Systems of inequality that function in greater society are glaringly obvious in the climate change movement.

Climate change and its effects are not gender neutral. Womxn account for six out of ten of the world’s poorest, and two thirds of the world’s illiterate; their livelihoods are more dependent on the natural resources threatened by climate change. Many womxn in the Global South are natural resource managers; they make up the bulk of the agricultural workforce in rural areas and are responsible for collecting approximately two-thirds of the household water in developing countries. In a sense, they are at the frontlines of climate change. When natural disasters- freak floods, mudslides or droughts- occur womxn are significantly affected by it and experience it in an exceedingly heightened way. A 2007 study from the London School of Economics found that natural disasters are more likely to kill womxn than men, and that the disparity is largest where womxn are the poorest. Furthermore, the secondary effects of climate change, like displacement (womxn make up 80% of all climate refugees), agricultural and economic loss, disproportionately impact womxn from low-level income and rural communities and compounds their burdens. Reinforced gender inequality by patriarchal institutions and belief systems drastically reduce womxn’s physical and economic mobility, their voice, and their opportunity in many places, making them more vulnerable to environmental stress. Many are inhibited from accessing socio-economic rights and resources- if a natural disaster occurs they are quite literally trapped in the firing line of climate change.

Although studies show that womxn are often most impacted, they are frequently excluded from the policy and decision-making processes for climate change initiatives and solutions. The climate policy and regulatory spaces are historically spaces dominated by white men. Womxn should be as much a part of the solution for climate change as they are the primary victims thereof. There are few and shallow attempts at practicing intersectionality in mainstream responses to climate change resulting in the loss of entire communities and groups of people’s experiences, issues and potential solutions. If there is a sincere desire for a transformative and sustainable future then all perspectives need to be tapped into and all identities need to be included. More diverse leadership within climate change movements will mean more diverse ideas and creative solutions. Environmental sustainability and gender equality are interdependent. We cannot reduce and eliminate man-made climate change without simultaneously advocating for gender justice.