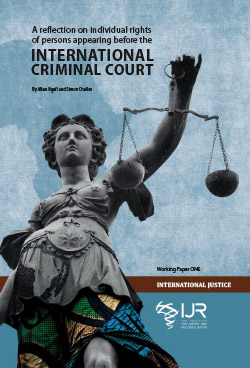 The Rome Statute of the International Criminal Court (‘Rome Statute’) codifies the rights of certain persons who appear before the International Criminal Court (‘ICC’ or â’Court’). This paper discusses the practice of the Court with respect to the rights of individuals who appear before it. The rights of an accused in different phases of Court proceedings and the rights of victims affected by crimes within the Court’s jurisdiction are considered at length and in the light of established principles regulating the Court’s treatment of the right to reparations for victims. These persons are key interlocutors in the international criminal justice system and have shifted the traditional focus of international law from being predominantly on States to being also on individuals; and they bring about a different kind of relationship between States as a collective and their treatment of these individuals arising from obligations imposed by the Rome Statute.

The minimum guarantees espoused in this human right are discussed from the perspective of the process of arrest and surrender of persons to the Court, and the following questions are posed: What effect does the infringement of these rights have on the arrest and surrender of a person to the Court and on the trial of the accused person as a whole? Are there circumstances of violation of the rights of the accused so grave as to call for the accused’s acquittal, or mitigated sentence? The conduct of the Court Prosecutor in one of the cases is briefly discussed to illuminate these issues. The section concludes with an examination of the effect of amnesties and immunities (including official immunities and so-called evidentiary immunities), and their effect on the surrender of accused persons and the subpoena of witnesses.

The section that follows describes the innovative approach adopted towards the rights of victims under the Rome Statute system. The discussion on the right to participate in legal proceedings is broken down in terms of the different phases of proceedings at the Court: the pre-trial phase; trial phase; appellate phase; and other proceedings arising from the investigation and prosecution of a case. That discussion critically examines actual Court practice in determining victim status and the evaluations of applications to participate in the current situations of the Court. Some suggestions on how the practice could be streamlined in future situations and cases are also made, in the interests of oiling the wheels of the Rome Statute system of justice.

The paper analyses the right to reparations in international criminal law as codified in the Rome Statute. The analysis uses for assistance the first case before the Court ‘the Prosecutor v. Thomas Lubanga Dyilo’ to establish the principles applicable in realising the reparations right of victims of the crimes within the Court’s jurisdiction.

The paper concludes by briefly considering the issue of other individuals who may appear before the court, using the case of The Prosecutor v. Walter Osapiri Barasa, in the situation in the Republic of Kenya, to discuss Article 70 of the Rome Statute.