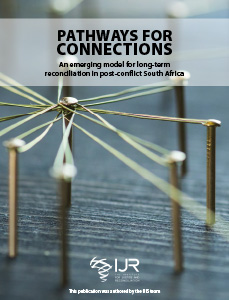 Virtually everything ever written about the 1996 Truth and Reconciliation Commission (TRC) describes its work as unfinished. The Institute of Justice and Reconciliation (IJR) grew directly out of the TRC, precisely to carry on its purpose. By now, it has matured through twenty years of further experience, retaining the vision of the role of reconciliation in South African society. As such, it forms an important part of life in the democratic South Africa.  From 2012 through 2016, the IJR undertook a project, Building Integrated Communities, to test ways that reconciliation can be promoted and to develop a methodology from which anyone can learn. Its findings are now available in a single volume.

Features of the book

This is a book full of considerable insight and wisdom. At first it might appear to be describing the kinds of worlds that many of us work in on a daily basis.  But it does not take long before the depths of experience it captures begin to speak with a reassuring voice of authority.

The book tells us what it takes to do effective reconciliation and social cohesion work. It is designed as a resource book which offers a valuable tool kit of advice based on experience, but all backed up by quantified studies, made simple through diagrams and charts. Key terms and concepts are clearly explained.  The book draws on a considerable body of work and extensive exposure to communities and sub-communities grappling with how to heal themselves and build a better society. Case studies are provided and each one is followed by a ‘Learnings’ section to capture the key points.

By now it is clear that meaningful reconciliation work simply takes time.  People need to go into issues in depth. It is good to know that people can actually be talked through much of their inherited prejudices. But this needs time, skill and a conducive context. IJR estimates that a good project needs three to five years of engagement.

The book gives numerous examples of how ‘creating a safe space’ is necessary for such work. The best format is to hole up for five-day or week-long retreats.  This gives the advantage of levelling the playing fields between all participants and removing them from their everyday lives and concerns.  For a short while, people need to be able to enjoy and think in a neutral world where all live as equals as much as possible. But the book makes it clear that sustaining the gains from such intensive work is not easy.  The real world is just too powerful and overwhelming!

Readers are forewarned that one of the biggest frustrations comes from designing what should be a great programme and then many people who promised to come, just don’t. There is a world out there of ‘spoilers’ who feel very threatened by questioning the status quo and who can apply considerable pressure on people to not participate.

The authors believe that it is still often important to start with ‘internal dialogues’ among people from similar backgrounds.  This, in turn, lays a foundation for ‘external dialogues’ once people have gained confidence in their own voices and views. In their own words, healing has to come before dialogue. The differences between personal and community healing are spelt out.

The authors ask what makes a person heal. The answers highlight the importance of telling stories and of listening to stories of others, distinguishing between what is shallow and what is deep. Genuine trust is deep, but has to be earned.

Perhaps one of the special gifts of the book is its insight into the ups and downs of working with people across generations. A good deal of social tension exists between the post-’94 generation and its parents. Similarly, the potential role of artistic creativity is explored as an important way to disrupt old habits and provide visions of alternatives. Projects that include the arts of all types have stronger likelihood of success.

The true test of effectiveness is whether participants can keep up some form of momentum after the formal sessions.  Assessing the impact of social cohesion efforts is always elusive, but the case studies are written in a way that continuously provides answers to this question.

The book offers a thoughtful and unbiased analysis of where South African society is today.  This includes the troubling thought that the negotiated settlement of the early 1990s is ‘unravelling.’ The stumbling block is the massiveness of both inequality and the long-term legacy of systemic violence which are entrenched in social reality.

The authors point out that the 1994 negotiated solution focused primarily on concrete, tangible issues to the neglect of intangible social issues. Foremost of the side-lined topics was race-based thinking, which had been the heart and soul of the apartheid era.  This remains an issue today, while the public is still focused on the ‘politics of the belly’, meeting their material needs. Understandable as this is, the bottom line is that social cohesion work has to compete for scarce funding, as well as for people’s attention.

This sphere has not been utterly neglected and overlooked since 1994. Over the years, we have had the RDP of the Soul, the Moral Regeneration Movement and the focus on Social Cohesion.  All testify to the fact that mental attitudes should be high on the agenda. But the harsh reality is that these efforts are a drop in the ocean and at times seem invisible. The declining moral fibre of society as a whole is decried from all quarters, but no one really knows how to stop it. Creating the safe spaces for structured, guided dialogues may be the solution, but it is expensive.

Are people ‘ready’ to talk about the past and to do things differently? What motivates them to try? Perhaps one of the books’ greatest strengths is that it speaks in a fair, even-handed way of the about the truth that white people are the least interested in working towards social cohesion. It documents how hard it is for most white people to see others as their equals. They retain condescending attitudes which prefer to bestow charity. Privileges enjoyed because of skin colour remain largely invisible to themselves. The fear that one person’s gain implies another person’s loss remains strong. It is so often seen as ‘me or you’ instead of ‘me and you’.

The IJR experience has shown that constructing new knowledge and meanings for society together is the essence of reconciliation. Layers of awareness that can be achieved through IJR activities are thoughtfully outlined. But the authors are too gentle, failing to mention the original violence that was done when Europeans seized the home lands of the African people. Apparently, white descendants are not yet ready to talk about that, even as their critics raise the volume on demands for redress.

The years 2015 and 2016 brought race tensions to the surface in South Africa in new ways, both through startling public displays of racist behaviour, as well as the energetic student protest movements. If 2017 was quieter, it does not mean that matters are resolved. IJR was swept up in the heat of the day, often called on to give expert advice on radio and TV. In the process, they experienced the extreme shallowness, and even dangers, of using social media in contested situations.

The book concludes with recommendations and a long list of thought-provoking questions – ones that have no easy or obvious answers. Everyone involved in social cohesion work should familiarise themselves with these and then strive to help give birth to the answers. This book brings us to the front line of the battle for an inclusive society.

For video summaries on the Pathways For Connections book launch, visit the IJR Youtube page