Vehicles for accountability or cloaks of impunity? How can national commissions of inquiry achieve accountability for violations of the right to life? 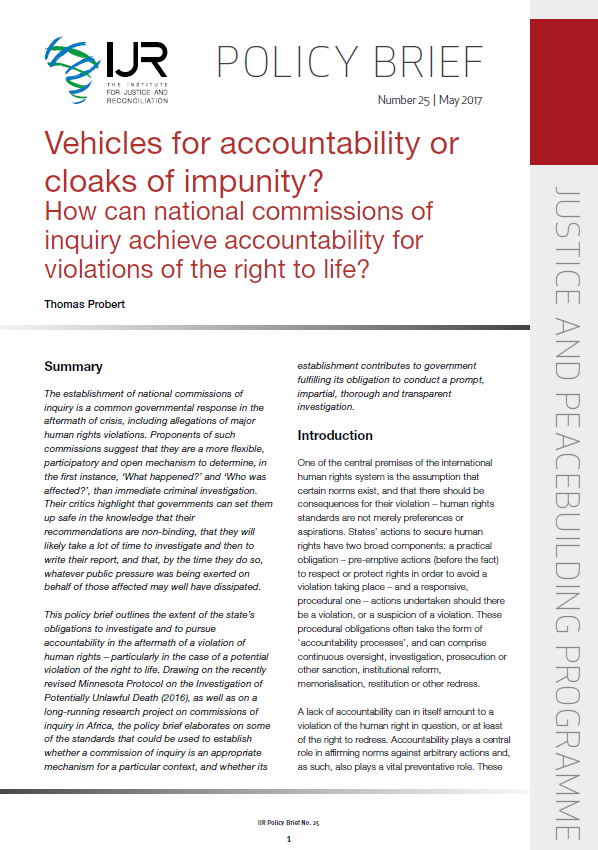 Vehicles for accountability or cloaks of impunity? How can national commissions of inquiry achieve accountability for violations of the right to life?

The establishment of national commissions of inquiry is a common governmental response in the aftermath of crisis, including allegations of major human rights violations. Proponents of such commissions suggest that they are a more flexible, participatory and open mechanism to determine, in the first instance, ‘What happened?’ and ‘Who was affected?’, than immediate criminal investigation. Their critics highlight that governments can set them up safe in the knowledge that their recommendations are non-binding, that they will likely take a lot of time to investigate and then to write their report, and that, by the time they do so, whatever public pressure was being exerted on behalf of those affected may well have dissipated. This policy brief outlines the extent of the state’s obligations to investigate and to pursue accountability in the aftermath of a violation of human rights – particularly in the case of a potential violation of the right to life. Drawing on the recently revised Minnesota Protocol on the Investigation of Potentially Unlawful Death (2016), as well as on a long-running research project on commissions of inquiry in Africa, the policy brief elaborates on some of the standards that could be used to establish whether a commission of inquiry is an appropriate mechanism for a particular context, and whether its establishment contributes to government fulfilling its obligation to conduct a prompt, impartial, thorough and transparent investigation.