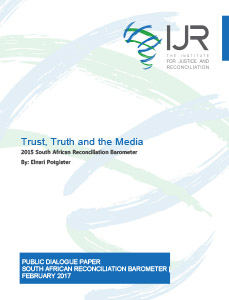 The 2015 South African Reconciliation Barometer (SARB)  asked respondents how often they use various media forms for political information, how much they trust political information from various media forms, and the confidence that they have in certain media institutions. These findings were released as a public dialogue paper and formed part of discussion, which aimed to encourage a conversation with regards to the role of “the Media” in South Africa’s democracy and the expectations in this regard. The public dialogue paper furthermore considers the relationship of the media and citizens in South Africa – in terms of building or diminishing political trust, and of citizens as agents within a democracy – who access and share political information through various media sources