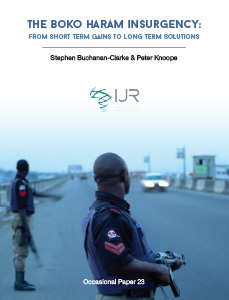 Since the beginning of Boko Haram’s insurgency in 2010, thousands of Nigerian civilians have lost their lives, with millions more being both internally and externally displaced. Under President Buhari, an overhaul of Nigeria’s counter-insurgency strategy and improved regional coordination through the Multinational Joint Task Force has severely diminished Boko Haram’s ability to hold territory and carry out cross-border attacks. However, while security forces may have put Boko Haram on the back foot, the social and political root causes of the insurgency remain largely unchanged. As seen in other contexts, short term military gains against violent extremism tends often to simply disguise its root causes and discourage long term solutions based on structural and economic reforms. This papers offers an analysis of some of the key challenges to creating a sustainable peace in Nigeria and identifies factors of resilience and recent positive developments which should be capitalized on to diminish the threat of violent extremism in the long term.