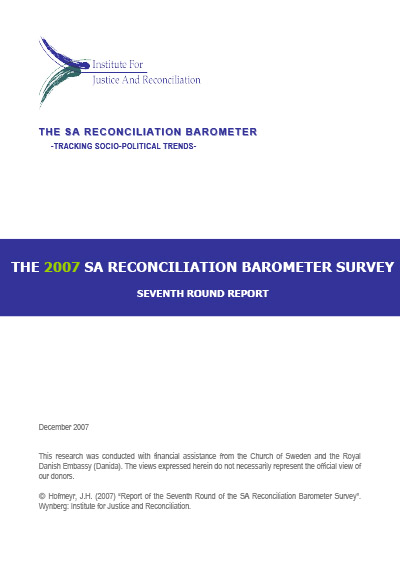 This document contains some of the key findings of the seventh round of the South African Reconciliation Barometer (SARB) Survey, a nationally representative survey conducted annually by the Institute for Justice and Reconciliation. This particular survey was conducted in March and April 2007.

As in previous years, it has enquired about the issue of race relations and interaction between South Africa’s historically defined racial categories – typically those aspects that first come to mind when we hear the word “reconciliation”. If racial interaction were indeed the only indicator that we used to measure the extent to which South Africans are starting to find each other in the wake of apartheid, the prognosis for national reconciliation in 2007 would be very positive. Although 48 per cent of respondents indicated that they never interact socially with anybody from a different racial group, this figure represents a significant year-on-year decrease of eight percentage points. This in itself is a positive finding.

Yet, it would be a mistake to interpret this result in isolation from other key indicators employed in the survey, because as consecutive rounds have shown, most South Africans today view material inequality, and not race, as the most significant line of division that runs through our society. When viewed from this perspective, our findings bear less encouraging news. This is borne out in significant year-on-year declines in positive personal evaluations for physical safety and economic wellbeing. South Africans feel less secure in their homes and have shown higher levels of economic uncertainty when compared to the same measurement period in 2006. These findings have been recorded despite empirical evidence to the contrary that overall material disposition of South Africans has improved since the turn of the millennium. Regardless of whether the recorded public sentiment is based on fact or not, it is critical to address the perception of insecurity. Both on a physical and economic level it is potentially potent as it breeds suspicion, but also raises the stakes for the attainment of scarce resources. Often this occurs along the fault lines that have been ingrained in our society by apartheid social engineering.

The decline in levels of economic and physical security has coincided with substantial decreases in ratings of government performance. The survey has used a list of 23 performance items, which ordinary South Africans would typically use to evaluate those who govern them. None of these items showed increases in positive evaluation – seven recorded decreases of more than 20 per cent. Two human security issues, “Crime” and “The Cost of Living” were amongst the five worst performers, with dismal approval ratings of 33 and 37 per cent respectively.

The biggest year-on-year drop occurred in relation to the item, “Transparency and Accountability”. Here a 28 percentage point decrease from 67 per cent to 39 per cent was recorded. This finding, we believe, is related to another discouraging finding, namely marked drops in confidence for democratic institutions, such as political parties, the three spheres of government, parliament, and not least, the presidency. Our analysis further shows a strong correlation between these findings and an 8 per cent decline in the percentage of citizens who trust their leaders. As a result of the ruling party’s presidential contest – first denied and now acknowledged – leadership has been a pervasive theme in our public discourse over the past year. While some have described the debate around it as a symptom of a vibrant democracy, it is undeniable that in some instances the conduct of the main protagonists has been shortsighted and not in line with what we should reasonably expect from our democratic leaders. Because prudent leadership is necessary for social stability, this issue cannot be separated from the broader imperative for national unity and reconciliation.