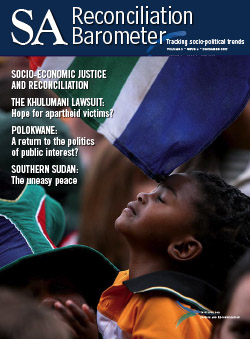 The Day of Reconciliation on 16 December will this year probably be overshadowed by the start of another event that has captured front pages for the past two years. On this same day the 52nd National Conference of the African National Congress (ANC) starts in Polokwane, the capital of the country’s most northern province, Limpopo. After a year of intense speculation, South Africans will know who the leader of its dominant political party will be.
By its own admission, the rifts that have been caused by the leadership contest have not been good for the ANC. It has clearly divided the party into different camps. But what broader impact has this power struggle had on the actual society being governed by an ANC government? Ebrahim Fakir, who deals with this question in his contribution to this last issue of the SA Reconciliation Barometer for 2007, suggests that the discourses that have evolved alongside the two main protagonists – one essentially populist and the other predominantly technocratic – have failed to give proper recognition to the voices of ordinary citizens. Should such rhetoric eventually materialise in the form of policy, the ANC stands to squander one of its greatest attributes, the ability to engage ordinary people, regardless of who gets the ultimate nod from delegates in Polokwane. This will obviously also have implications for its ability to mobilise initiatives that promote greater unity amongst all South Africans.

In this regard, we also publish key findings relating to South African public opinion about relations between South Africa’s constitutive population groups that emanate from the latest round of the Institute’s SA Reconciliation Barometer Survey. Judging by the experiences of ordinary South Africans, great strides have been made over the past thirteen years in this regard. Yet informal contact between ordinary people of different races remains low and still poses a significant obstacle to the normalisation of relations between those that call this country home.

In addition, this issue looks at the significance of South Africa’s rugby world cup victory for the process of nation-building, as well as the role that the public and private media can play in this regard. Pieter van Gylswyk, head of the IJR’s Transitional Justice in Africa Progamme, shares his thoughts on the prospects for peace in Sudan after a recent visit to the southern part of this war-torn country. Another contribution comes from Marjorie Jobson, acting director of the Khulumani Support Group, and Tshepo Madlingozi, its advocacy coordinator, who discuss the impact of Khulumani’s successful appeal in an American court against an earlier finding that a class action suit against multinational companies that did business with apartheid South Africa could not be heard before it it.

Charles Villa-Vicencio writes for this publication for the last time in his capacity as Executive Director of the IJR, and reflects in his Note from the Executive Director on the positioning of the IJR as a civil society organisation serving the cause of justice and national reconciliation, but acutely aware that dogmatic approaches to either will not bring us any closer to the normalisation of South African society. He notes that while the repression of the past should not be forgotten, we should now focus our attention on the legacy of injustice that it has left in the form of socio-economic inequality.

We would also like to pay tribute to Charles here for the central role that he has played in bringing the Institute for Justice and Reconciliation into life, and for the dynamic leadership that has seen it grow from strength to strength. It is his passion for a just, people-centred society that has constantly driven the Institute to new heights, and it is this ethos that will continue to inspire it in the future.
We would like to wish all our readers a happy festive season and a good start to the new year.