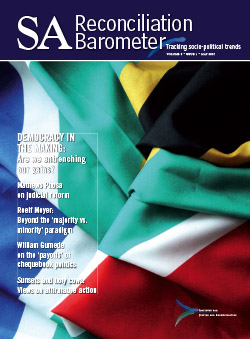 The number thirteen fills the superstitious amongst us with a sense of trepidation: nothing is taken for granted and a general sense of unease prevails when this menacing number shows up. As it happens, 2007 is the thirteenth year in the life of the South African democracy.

Pointing out our democracy’s age in this year’s first issue of the SA Reconciliation Barometer may therefore alarm those who find significance in numerical omens. Are we suggesting, like many doomsayers since 1994, that this is the year when the weaknesses of our young democracy will catch up with it? Certainly not, and even if we were, it would be hard to convince the vast majority of South Africans who believe precisely the opposite. In the most recent round of the SA Reconciliation Barometer Survey of the Institute for Justice and Reconciliation, conducted in April and May 2006, 70 per cent of South Africans indicated that this country is moving in the right direction. And we concur with the majority.

True, the questions we face as a country this year involve many ‘unknowns’, and yes, these questions will probably have far-reaching implications for our future. We will have to wait until the end of this year for the answer to the most vexing of these unknowns: the election of the African National Congress’ leadership structure. Since both our post-apartheid presidents have left an indelible personal imprint on South African society, the same can be expected from our new leader; that is, unless new leadership models are adopted which shift real executive power of the president from the Union Buildings to Luthuli House. If this actually happened, it would potentially have broader and longer-term repercussions for the future than the actual identity of our new leader. However, in the absence of such new organisational designs, the need for policy continuity will circumscribe the incoming president’s ability to implement instant change, regardless of what that change may be. As President Mbeki noted in his State of the Nation speech earlier this year, policies, once formulated, are often faced with implementation capacity deficits and do not automatically translate into changed circumstances.

Let us move on to the ‘knowns’. We have a functioning constitutional democracy that can, by and large, contain the tensions that are characteristic of a developing nation like ours. Up to now, our democracy has managed to cope with the burdens bequeathed it by the racial divisions and economic inequalities of the past. Similarly, we have learnt the importance of continuously reinforcing consensus, negotiation and open public debate – the cornerstones of our democratic architecture – in order to retain the sense of ownership and responsibility that South Africans feel towards their country’s future.

Another important ‘known’ is the good shape of the economy. And while clouds may be gathering on the global economy’s horizon, our ship is more seaworthy and better equipped to weather any storms that may come our way. Although the economy’s major structural problem, inequality, remains with us, we have much more information at our disposal about the extent of the problem and, irrespective of which side of the debate we find ourselves on, many more possible solutions to it.

This new-look and longer issue of the SA Reconciliation Barometer looks at a number of these debates. The articles offer insight into various perspectives on our democratic evolution over thirteen years. Divergent they may be, but as a collection they underline the fact that we are beyond the stage where superstition should be used to make sense of this country.