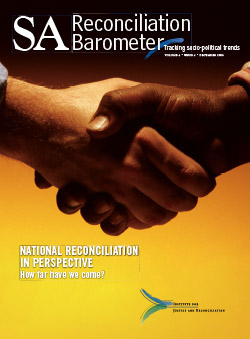 On 16th December South Africans will celebrate the Day of Reconciliation. Although it featured quite prominently as a result of the work of the Truth and Reconciliation Commission (TRC) in the first five years after our democratic transition, the concept of ‘reconciliation’ has gradually faded from our public discourse. Ten years after the first public hearing of the TRC in the East London town hall, it is hardly mentioned anymore. There may be a number of reasons for this.

As Nonkosi Mngxali and Nthuthuzelo Vananda explain in their article about young black professionals, it may be because reconciliation does not feature on the priority list of many of those who have inherited the post-apartheid state. For them the pursuit of personal economic security takes precedence over any broader national quest for social cohesion. Others, like PAC president, Letlapa Mphahlele, argue that it is the absence of properly addressing this question of economic security that prevents South Africans from finding each other. Unless verbal acknowledgement of apartheid wrongs and commitment to change is matched by sufficient economic reparation to address the material roots of our division, no national healing will take place, says Mphahlele. Dave Steward, executive director of the FW de Klerk Foundation, also believes that certain opportunities for reconciliation in the wake of our political transition were missed. Steward contends that a more representative TRC could have ensured that all perspectives and narratives of South Africa’s constitutive population groups were better represented in the Commission’s final findings. Amanda Gouws, professor in politics at the University of Stellenbosch, suggests in her article that in taking stock of our progress towards reconciliation, we should be careful that we do not confuse it with ‘tolerance’, which implies something very different. In addition to the ‘putting up with differences’ that should be understood under the term ‘tolerance’, reconciliation involves the more stringent requirement of forgiveness. This raises the question of whether the fizzling out of public discourse around the question of reconciliation might not be due to a false sense of comfort that was generated by our smooth political transition. If the peaceful nature of this transition was due to high levels of tolerance, how much longer will it last?

This issue contains some of the most recent findings of the SA Reconciliation Barometer Survey, an annual survey of the Institute for Justice and Reconciliation, which measures public responses to social, political and economic change, and how this impacts on the national reconciliation process. The survey reflects on some of the questions that have been highlighted by our contributors to this issue, and finds, amongst other things, that meaningful public dialogue, which should be the foundation of any reconciliation process, is still lacking. The survey, however, reflects a strong desire amongst South Africans for national unity with an inclusive character. This opportunity needs to be seized.

The Institute for Justice and Reconciliation would like to wish the readers of this publication a happy festive season and a good start to the New Year. It is our hope that 2007 will be used by all who love this country to work tirelessly towards this inclusive national unity.