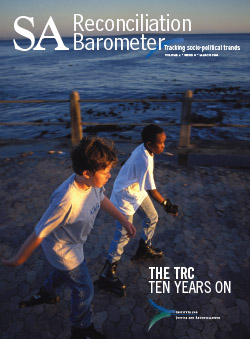 In April this year we commemorate the first public hearing of the Truth and Reconciliation Commission (TRC), which took place ten years ago in 1996. Brought into life by the Promotion of National Unity and Reconciliation Act that had been promulgated a year earlier, the commission’s premise was that the truth about our apartheid past was a precondition for our common future as a reconciled nation.

The Commission’s brief to investigate human rights violations, preside over amnesty applications and make recommendations about victim reparations brought it into conflict with all the major political protagonists at the time. In 2003, after last minute legal challenges that necessitated changes and omissions to its original text, the Commission’s final report was handed over to the government.

It made four key recommendations. The first was that an accessible archive of key TRC documentation be created. Closely related to this was the second proposal – for a concerted effort to institutionalise the memorialisation of the struggle against apartheid. Thirdly, the Commission recommended that alleged gross human rights violators, who were not granted amnesty or did not apply for it, should face prosecution. And, according to the Commission’s last key recommendation, the victims of such violations should receive meaningful reparations.

The recommendations on archiving and memorialisation are essential for the creation of a common understanding of our past, without which the foundation for a shared future cannot not be laid. The recommendation on prosecutions recognises the need for a benchmark against which to measure the application of human rights in a democratic South Africa. The same reasoning characterises the Commission’s thinking on the awarding of reparations to victims of human rights violations, where it was recommended that reparations should compensate victims for their suffering and help restore their dignity.

How effectively have these recommendations been implemented? Some argue that a lack of political will has led to half measures. Others caution against impatience and the repolarisation of a society that is still largely divided along racial lines. From 20–21 April, the Institute for Justice and Reconciliation will be hosting a conference with the theme, The Truth and Reconciliation Commission – Ten Years On, which will assemble scholars and practitioners intimately involved with the TRC’s recommendations, both during their drafting and since the Commission’s completion in 2003. Conference participants will reflect on the progress made in implementing the recommendations as well as their impact on our society.
This edition of the SA Reconciliation Barometer is intended as a precursor to this conference. It contains contributions by a number of role players who have actively participated in the reconciliation debate over the past decade. These articles examine state and private responses to the TRC’s final report, but also consider what it means to be a reconciled society. We hope they will stimulate this debate further, as issues pertaining to reconciliation remain as relevant today as they did ten years ago when the Commission started its work.