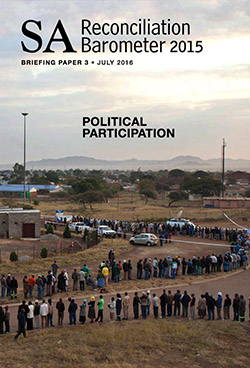 Many South Africans feel out of touch with key representative institutions and the elected political leaders who preside over them. As a result, close to half of the respondents surveyed during the 2015 South African Reconciliation Barometer (SARB) Survey, which was conducted in August and September of 2015, indicated that voting in elections has little impact on the course that the country takes. In spite of this scepticism regarding the power of their vote, most respondents indicated a preference for peaceful means of democratic expression. However, around 15% indicated that they had used violence or force to achieve their political objective in the preceding 12 months. Another 10% indicated that, although they had not engaged in such activities, they would if the circumstances demanded. That
one-quarter of voting-age respondents indicated receptiveness to violent forms of political engagement in the run-up to local-government elections in August 2016, should be a source of concern. To date, several observers have expressed their disappointment with the polarising rhetoric of the political campaigns thus far and the impact that this may have on the conduct of the elections. High levels of distrust still exist among South Africans of different, historically defined racial categories, as previously reported results of the 2015
SARB Survey have shown. As such, it will be incumbent on political organisations to act in ways that do not exacerbate these racial schisms, and, more broadly, also avoid any other forms of mobilisation that may cast doubt on the ultimate outcome.
DOWNLOAD