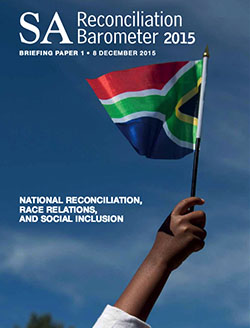 By: Jan Hofmeyr and Rajen Govender
Pages: 28
Dimensions: A4
Date of publication: 8 December 2015

While most South Africans agree that the creation of a united, reconciled nation remains a worthy objective to pursue, the country remains afflicted by its historical divisions. The majority feels that race relations have either stayed the same or deteriorated since the country’s political transition in 1994 and the bulk of respondents have noted income inequality as a major source of social division. Most believe that it is impossible to achieve a reconciled society for as long as those who were disadvantaged under apartheid remain poor within the ‘new South Africa’. Although there is a desire among most South Africans to have more contact with people from racial groups other than their own, they are precluded from doing so by the spatial and economic legacies of apartheid. These also serve to reinforce old prejudices.