Policy Brief No 20: The African Court of Justice and Human Rights and the ICC 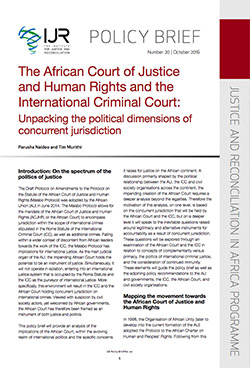 By Parusha Naidoo and Tim Murithi
Pages: 8
Dimensions: A4
Date of publication: October 2016

Policy Brief No 20: The African Court of Justice and Human Rights and the International Criminal Court – Unpacking the political dimensions of concurrent jurisdiction

This policy brief will provide an analysis of the implications of the African Court, within the evolving realm of international politics and the specific concerns it raises for justice on the African continent. A discussion primarily shaped by the political relationship between the AU, the ICC and civil society organisations across the continent, the impending creation of the African Court requires a deeper analysis beyond the legalities. Therefore the motivation of this analysis, on one level, is based on the concurrent jurisdiction that will be held by the African Court and the ICC, but on a deeper level it will speak to the inevitable questions raised around legitimacy and alternative instruments for
accountability as a result of concurrent jurisdiction. These questions will be explored through an examination of the African Court and the ICC in relation to concepts of complementarity versus primacy, the politics of international criminal justice, and the consideration of continued immunity. These elements will guide the policy brief as well as the adjoining policy recommendations to the AU and governments, the ICC, the African Court, and civil society organisations.