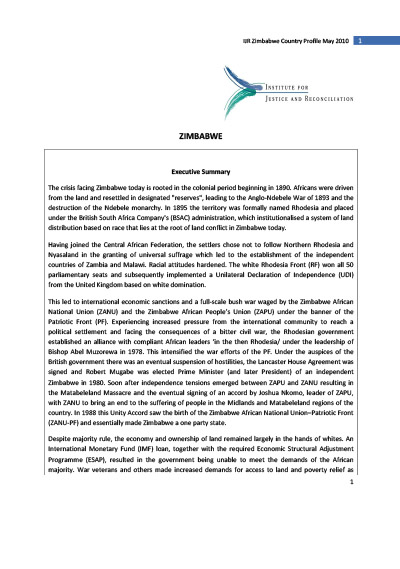 The crisis facing Zimbabwe today is rooted in the colonial period beginning in 1890. Africans were driven from the land and resettled in designated “reserves”, leading to the Anglo-Ndebele War of 1893 and the destruction of the Ndebele monarchy. In 1895 the territory was formally named Rhodesia and placed under the British South Africa Company’s (BSAC) administration, which institutionalised a system of land distribution based on race that lies at the root of land conflict in Zimbabwe today.

Having joined the Central African Federation, the settlers chose not to follow Northern Rhodesia and Nyasaland in the granting of universal suffrage which led to the establishment of the independent countries of Zambia and Malawi. Racial attitudes hardened. The white Rhodesia Front (RF) won all 50 parliamentary seats and subsequently implemented a Unilateral Declaration of Independence (UDI) from the United Kingdom based on white domination.

This led to international economic sanctions and a full-scale bush war waged by the Zimbabwe African National Union (ZANU) and the Zimbabwe African People’s Union (ZAPU) under the banner of the Patriotic Front (PF). Experiencing increased pressure from the international community to reach a political settlement and facing the consequences of a bitter civil war, the Rhodesian government established an alliance with compliant African leaders ‘in the then Rhodesia/ under the leadership of Bishop Abel Muzorewa in 1978. This intensified the war efforts of the PF. Under the auspices of the British government there was an eventual suspension of hostilities, the Lancaster House Agreement was signed and Robert Mugabe was elected Prime Minister (and later President) of an independent Zimbabwe in 1980. Soon after independence tensions emerged between ZAPU and ZANU resulting in the Matabeleland Massacre and the eventual signing of an accord by Joshua Nkomo, leader of ZAPU, with ZANU to bring an end to the suffering of people in the Midlands and Matabeleland regions of the country. In 1988 this Unity Accord saw the birth of the Zimbabwe African National Union–Patriotic Front (ZANU-PF) and essentially made Zimbabwe a one party state.

Despite majority rule, the economy and ownership of land remained largely in the hands of whites. An International Monetary Fund (IMF) loan, together with the required Economic Structural Adjustment Programme (ESAP), resulted in the government being unable to meet the demands of the African majority. War veterans and others made increased demands for access to land and poverty relief as economic pressures increased. Unable to risk the political consequences of this discontent Mugabe committed himself to meeting their demands for access to land. At the end of almost two decades of independence this commitment resulted in the invasion of white-owned farms, violence and further economic decline.

Opposition politics, leading to the founding of the Movement for Democratic Change (MDC), was driven throughout this period by trade unions and civil society. It resulted in continual incremental defeats of ZANU-PF at the polls. With Mugabe continuing to resist political change, international pressure was intensified. A facilitation process was at the same time led by then South African President Thabo Mbeki under the auspices of the Southern African Development Community (SADC). This resulted in the establishment of an inclusive government that is tasked to rebuild the economy, re-establish structures of good governance, address issues of service delivery and promote nation building.