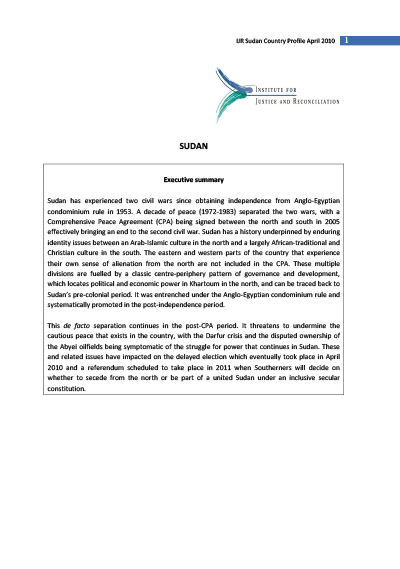 Sudan has experienced two civil wars since obtaining independence from Anglo-Egyptian condominium rule in 1953. A decade of peace (1972-1983) separated the two wars, with a Comprehensive Peace Agreement (CPA) being signed between the north and south in 2005 effectively bringing an end to the second civil war. Sudan has a history underpinned by enduring identity issues between an Arab-Islamic culture in the north and a largely African-traditional and Christian culture in the south. The eastern and western parts of the country that experience their own sense of alienation from the north are not included in the CPA. These multiple divisions are fuelled by a classic centre-periphery pattern of governance and development, which locates political and economic power in Khartoum in the north, and can be traced back to Sudan’s pre-colonial period. It was entrenched under the Anglo-Egyptian condominium rule and systematically promoted in the post-independence period.

This de facto separation continues in the post-CPA period. It threatens to undermine the cautious peace that exists in the country, with the Darfur crisis and the disputed ownership of the Abyei oilfields being symptomatic of the struggle for power that continues in Sudan. These and related issues have impacted on the delayed election which eventually took place in April 2010 and a referendum scheduled to take place in 2011 when Southerners will decide on whether to secede from the north or be part of a united Sudan under an inclusive secular constitution.