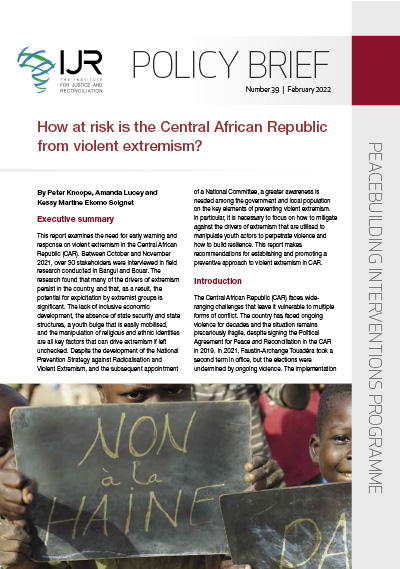 IJR Policy Brief 39: How at risk is the Central African Republic from violent extremism?

This report examines the need for early warning and response on violent extremism in the Central African Republic (CAR). Between October and November 2021, over 30 stakeholders were interviewed in field research conducted in Bangui and Bouar. The research found that many of the drivers of extremism persist in the country, and that, as a result, the potential for exploitation by extremist groups is significant. The lack of inclusive economic development, the absence of state security and state structures, a youth bulge that is easily mobilised, and the manipulation of religious and ethnic identities are all key factors that can drive extremism if left unchecked. Despite the development of the National Prevention Strategy against Radicalisation and Violent Extremism, and the subsequent appointment of a National Committee, a greater awareness is needed among the government and local population on the key elements of preventing violent extremism. In particular, it is necessary to focus on how to mitigate against the drivers of extremism that are utilised to manipulate youth actors to perpetrate violence and how to build resilience. This report makes recommendations for establishing and promoting a preventive approach to violent extremism in CAR.