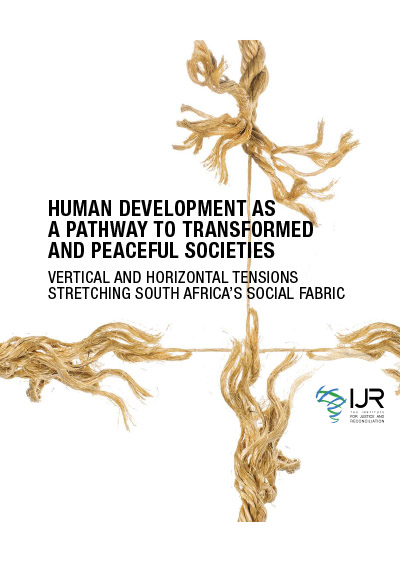 By: Jan Hofmeyr and Jaynisha Patel of
Pages: 42
Dimensions: A4
Date of publication: 2022

This research report considers the relationship between social cohesion and inclusive economic development in contemporary South Africa. An examination of patterns in unemployment, inequality and poverty – South Africa’s so-called triple nexus of structural challenges to inclusive development – it points to dysfunctionalities in the country’s governance system that obstruct the state’s ability to undo historically-entrenched, racialised patterns of resource distribution. These dysfunctionalities, that manifest in the absence of policy continuity and consistency in implementation, have the dual effect of reinforcing social fragmentation and eroding trust in the state’s capacity to create a democratic and inclusive South Africa. As a result, both the horizontal and vertical dimensions of social cohesion are being eroded. This weakening of the country’s social fibre makes it vulnerable to threats to the rule of law. Evidence of this are rising levels of protest, accompanied with public violence. In light of this, the research concludes that urgent reforms are required to restore the efficacy and, by implication, the integrity of the state as a source of social cohesion. This should start with a prioritisation of a professional and truly independent civil service that is insulated from party politics, and the strengthening of oversight institutions to enable them to execute their respective mandates without fear or favour. In addition, this research report calls for a stronger focus on the creation of human agency to reduce dependency, through quality education that meets the needs of economy and the creation of an enabling environment for young people entering the labour market.