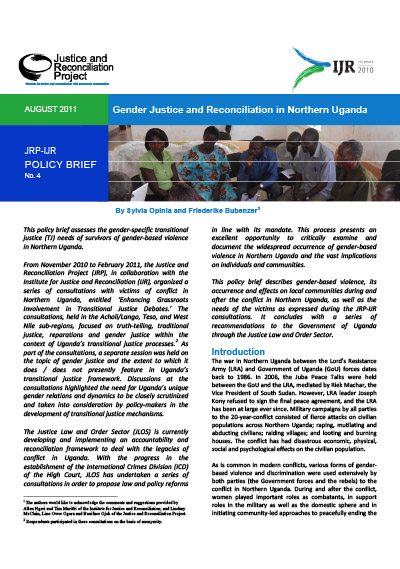 By: Sylvia Opinia and Friederike Bubenzer
Pages: 8
Dimensions: A4
Date of publication:  2011

The Justice Law and Order Sector (JLOS) is currently developing and implementing an accountability and reconciliation framework to deal with the legacies of conflict in Uganda. With the progress in the establishment of the International Crimes Division (ICD) of the High Court, JLOS has undertaken a series of consultations in order to propose law and policy reforms in line with its mandate. This process presents an excellent opportunity to critically examine and document the widespread occurrence of gender‐based violence in Northern Uganda and the vast implications on individuals and communities.

This policy brief describes gender‐based violence, its occurrence and effects on local communities during and after the conflict in Northern Uganda, as well as the needs of the victims as expressed during the JRP‐IJR consultations. It concludes with a series of recommendations to the Government of Uganda through the Justice Law and Order Sector.