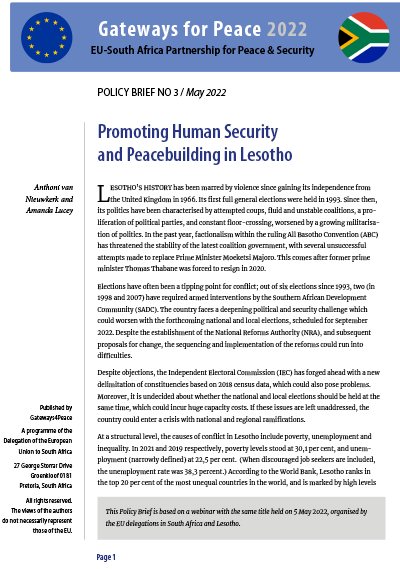 By: Anthoni van Nieuwkerk and Amanda Lucey
Pages:6
Dimensions: A4
Date of publication: 2022
Published by Gateways4Peace

LESOTHO’S HISTORY has been marred by violence since gaining its independence from the United Kingdom in 1966. Its first full general elections were held in 1993. Since then, its politics have been characterised by attempted coups, fluid and unstable coalitions, a pro-liferation of political parties, and constant floor-crossing, worsened by a growing militarisa-tion of politics. In the past year, factionalism within the ruling All Basotho Convention (ABC) has threatened the stability of the latest coalition government, with several unsuccessful attempts made to replace Prime Minister Moeketsi Majoro. This comes after former prime minister Thomas Thabane was forced to resign in 2020.

Elections have often been a tipping point for conflict; out of six elections since 1993, two (in 1998 and 2007) have required armed interventions by the Southern African Development Community (SADC). The country faces a deepening political and security challenge which could worsen with the forthcoming national and local elections, scheduled for September 2022. Despite the establishment of the National Reforms Authority (NRA), and subsequent proposals for change, the sequencing and implementation of the reforms could run into difficulties.

Despite objections, the Independent Electoral Commission (IEC) has forged ahead with a new delimitation of constituencies based on 2018 census data, which could also pose problems. Moreover, it is undecided about whether the national and local elections should be held at the same time, which could incur huge capacity costs. If these issues are left unaddressed, the country could enter a crisis with national and regional ramifications.