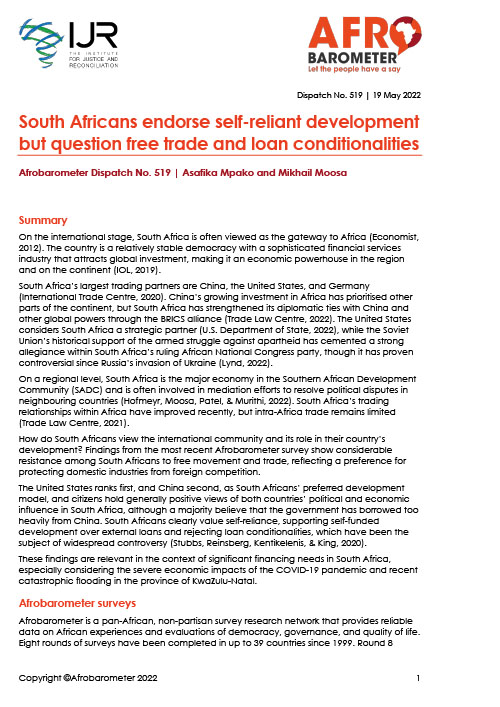 By: Asafika Mpako and Mikhail Moosa
Pages: 11
Dimensions: A4
Date of publication: 2022

On the international stage, South Africa is often viewed as the gateway to Africa (Economist, 2012). The country is a relatively stable democracy with a sophisticated financial services industry that attracts global investment, making it an economic powerhouse in the region and on the continent (IOL, 2019).

South Africa’s largest trading partners are China, the United States, and Germany (International Trade Centre, 2020). China’s growing investment in Africa has prioritised other parts of the continent, but South Africa has strengthened its diplomatic ties with China and other global powers through the BRICS alliance (Trade Law Centre, 2022). The United States considers South Africa a strategic partner (U.S. Department of State, 2022), while the Soviet Union’s historical support of the armed struggle against apartheid has cemented a strong allegiance within South Africa’s ruling African National Congress party, though it has proven controversial since Russia’s invasion of Ukraine (Lynd, 2022).

How do South Africans view the international community and its role in their country’s development? Findings from the most recent Afrobarometer survey show considerable resistance among South Africans to free movement and trade, reflecting a preference for protecting domestic industries from foreign competition.

The United States ranks first, and China second, as South Africans’ preferred development model, and citizens hold generally positive views of both countries’ political and economic influence in South Africa, although a majority believe that the government has borrowed too heavily from China. South Africans clearly value self-reliance, supporting self-funded development over external loans and rejecting loan conditionalities, which have been the subject of widespread controversy (Stubbs, Reinsberg, Kentikelenis, & King, 2020).

These findings are relevant in the context of significant financing needs in South Africa, especially considering the severe economic impacts of the COVID-19 pandemic and recent catastrophic flooding in the province of KwaZulu-Natal.