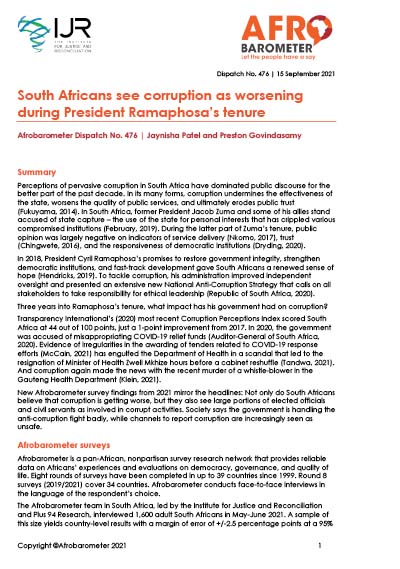 By: Jaynisha Patel and Preston Govindasamy
Pages: 12
Dimensions: A4
Date of publication: 2021

Perceptions of pervasive corruption in South Africa have dominated public discourse for the better part of the past decade. In its many forms, corruption undermines the effectiveness of the state, worsens the quality of public services, and ultimately erodes public trust  (Fukuyama, 2014). In South Africa, former President Jacob Zuma and some of his allies stand accused of state capture – the use of the state for personal interests that has crippled various compromised institutions (February, 2019). During the latter part of Zuma’s tenure, public opinion was largely negative on indicators of service delivery (Nkomo, 2017), trust (Chingwete, 2016), and the responsiveness of democratic institutions (Dryding, 2020).

Three years into Ramaphosa’s tenure, what impact has his government had on corruption?

Transparency International’s (2020) most recent Corruption Perceptions Index scored South Africa at 44 out of 100 points, just a 1-point improvement from 2017. In 2020, the government was accused of misappropriating COVID-19 relief funds (Auditor-General of South Africa, 2020). Evidence of irregularities in the awarding of tenders related to COVID-19 response efforts (McCain, 2021) has engulfed the Department of Health in a scandal that led to the resignation of Minister of Health Zweli Mkhize hours before a cabinet reshuffle (Tandwa, 2021). And corruption again made the news with the recent murder of a whistle-blower in the Gauteng Health Department (Klein, 2021).

New Afrobarometer survey findings from 2021 mirror the headlines: Not only do South Africans believe that corruption is getting worse, but they also see large portions of elected officials and civil servants as involved in corrupt activities. Society says the government is handling the anti-corruption fight badly, while channels to report corruption are increasingly seen as unsafe.