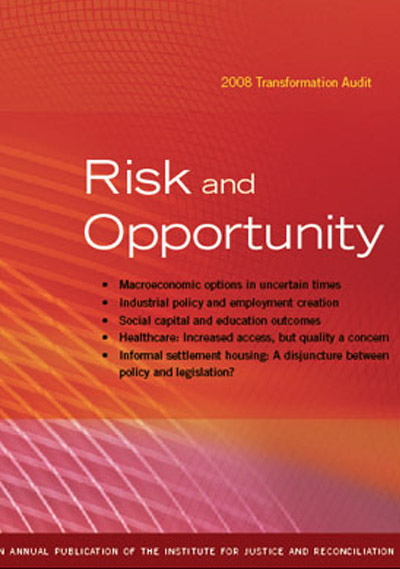 The Africa reached such a turning point – seizing the opportunity to embrace democracy and to begin a comprehensive process of social and economic transformation. The change generated widespread gains, indeed turning risk into opportunity. Today we ﬁ nd ourselves in a stable South Africa with sound economic fundamentals. This is a tribute to a leadership that drove the vision of a South Africa that could change peacefully and to the beneﬁt of the majority of its citizens.

However, with the gains of democracy also came massive expectation and, 15 years later, some disappointment. Despite democracy, peace in communities remains brittle. Despite eco-nomic gains, racialised inequality lingers. Despite transformation programmes, institutions continue to suffer from a lack of popular legitimacy. Despite ambitious government policies, the poor continue to suffer from patchy service delivery. Despite having turned the risk of civil war into the opportunity of democracy, we still have a long way to go towards realising a just society at peace with all its citizens, whether rich or poor, indigenous or foreign, black or white.

This year, the Transformation Audit once again points with clarity and speciﬁ city to a variety of fault lines within our society. South Africa’s peculiar version of socio-economic inequality manifests itself in terms of both monetary income and access to basic services. Those who ﬁ nd themselves at the bottom of this social equation remain extremely vulnerable to the consequences of local or international change. To the poor, change almost invariably means large risk and minimum opportunity.

This publication appears at a time of change reinforced by international and South African developments. We ﬁ nd ourselves at a point where deteriorating global economic conditions are beginning to affect all South Africans, particularly the poor. All indications are that the world economy may be verging on a recession that will almost certainly culminate in a fundamental realignment away from the ‘turbo capitalism’ that has driven excessive proﬁ t seeking for more than a decade. While these changes take effect, and Wall Street millionaires seek early retirement, millions of vulnerable people will bear the brunt of the void of uncertainty that the old system is leaving behind.

Simultaneous with these changes washing over the world’s ﬁ nancial markets, South Africa’s political landscape is realigning itself. At the time of writing, the situation continues to unfold in a number of unpredictable, if fascinating, ways. The once rock-solid African National Congress (ANC) is reeling from a few years of feuding between followers of its two top leaders, Thabo Mbeki and Jacob Zuma. The result of this struggle, which culminated in the recall of the then President Thabo Mbeki, has been that several key leaders have left the fold to found a new political formation to challenge the ANC in the 2009 general elections. The bruising battle has tested the cohesion of the movement, the contours of party politics in South Africa, and the reputation of democratic institutions, several of which had become embroiled in the inﬁghting.

Thus, at the end of 2008, we ﬁnd ourselves at another profound turning point in South Africa (in no small measure due to this random convergence of international and local developments), which has signiﬁcantly deepened the sense of uncertainty and risk experienced by most South Africans. It makes the consolidation of political stability and economic policy urgent, but also elusive. It also begs the question how South Africa can again turn risk into opportunity.
South Africa was able to turn potential risks into opportunities during the change in 1994, because of extraordinary leadership, not only of top leaders such as Nelson Mandela, but also of committed cadres lower down the ranks who shared a sense of responsibility towards the nascent democracy they helped to create.
The question is whether we will be able to draw on similar leadership, both political and in the civil service, to guide us through this period of change in order to ensure that opportunity trumps risk. With this in mind, South Africans will look with great expectation, and some trepidation, to the way in which political leaders conduct themselves in the run-up to the 2009 elections.

Having said this, the 2009 election campaign should not be about personality politics. Policy, not personality, ought to be decisive – not least policies that can allow economic and political gains to feed into the central goal of eradicating the obscene levels of inequality in South Africa. This publication makes an important contribution to that policy discourse. Risk and Opportunity takes stock of where we ﬁnd ourselves at present, but also makes key suggestions about where we ought to be heading.

The Institute would like to recognise and express its sincere gratitude to Old Mutual and Investec Asset Management for their generous ﬁ nancial contributions towards making this publication possible.

In addition, the Institute would once again like to acknowledge its core funders, the Royal Dutch Embassy, the Swedish International Development Co-operation Agency (SIDA) and the Charles Steward Mott Foundation for their continued support of our work.