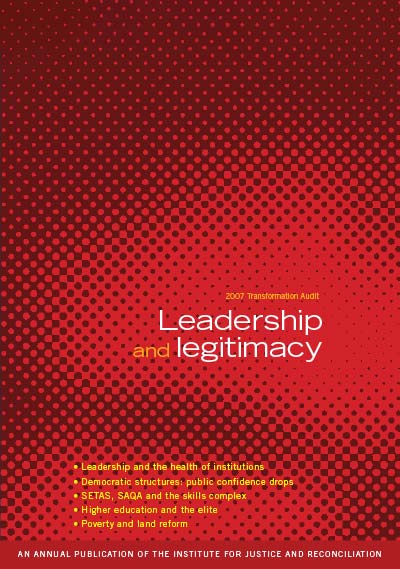 As a nation we made history in opening up a nation-wide dialogue about our identity and our future. Now more than ever we need this to be re-activated, and we need it to be about South Africans and not ruling party factions.

We face more than a crisis of governance. The present crisis strikes at the very roots of our democracy. The Institute conducts a yearly representative national public opinion survey called the South African Reconciliation Barometer, and the results this year constitute a stark warning. Conﬁdence in leaders, and above all in representative institutions, has dropped sharply. In addition, approval of government’s performance has dropped by over 20 per cent from the year 2006 on the following issues: transparency and accountability, correct appointments, afﬁrmative action, crime, inﬂation, narrowing the income gap, and ﬁghting corruption. Public trust is the key to the operation of a healthy democracy, and it is haemorrhaging away while leadership scrambles for the spoils.

Rather than the factional exchanges that have characterised the past year, it is time for us as a nation to get back to a conversation about leadership and the rules to which we re-dedicate ourselves in a search for national unity and coherence.

For this the character of our leaders is key. We have had, and need to have again, a national leadership that uniﬁ es South Africans in constructing a shared national identity – assent which is essential to the urgent projects of equality and upliftment.

The ruling party must heal itself. It was and must again be more than an imperial gateway to riches and impunity. We the citizens – South Africans rich and poor, black and white – need certainty about the just adherence to all of the processes of governance, rather than the growing perception that connectivity or party processes exempt an aristocracy from accountability. We need afﬁrmative action and black economic empowerment to work for the advancement of the many rather than the favoured few. We need our education system to deliver the basics of literacy and numeracy to primary school learners. We need our grants system to reach into the most impoverished rural areas, and shake public servants who impede this and treat citizens with contempt. If the ruling party cannot lead itself and its allies back to the moral high ground, it will fragment.

The Transformation Audit this year focuses on leadership and legitimacy: on the way in which many aspects of our national life and development are deﬁ ned by how they are led and managed. The paradox we see at the macro level is the way in which economic stability, rising afﬂuence and improving growth – normally stabilising factors in democracies – are contradicted by decreasing political conﬁdence such as shown by the SA 2007 Transformation Audit Reconciliation Barometer. The prospect is that this contradiction will further erode economic conﬁdence.

Considering the patterns of employment, we see that though 1.9 million formal sector jobs have been created in the past three years, the painful mismatch between available jobs and job seekers is becoming more acute. The vacancy rate of top managerial and specialist posts in government alone is in some departments (notably land) and some provinces enough to impede their fulﬁlment of their mandate. Business and civil society also struggle with this, while trained South Africans of all colours – think of the attrition of teachers and nurses – drain away from crumbling institutions in the sectors where they are needed and sometimes out of the country. The lesson is that sick institutions cannot retain the best, and their leadership is responsible for eroding the services that the poor depend on most.

AsgiSA and Jipsa are policy interventions designed to promote growth and skilling – but they may just plug in solutions rather than tackle the root of the problem, namely, the crises in institutions. The bottom line with opening up mass skilling and opportunity is that our chronic and continuing failure to deliver the educational basics of literacy and numeracy impede the Jipsa project. In 2004, 72 per cent of Grade 6 learners failed a national literacy test, and 88 per cent did not pass mathematics at Grade 6 level.

What we are looking at here is denial of a hopeful future to millions. Remedial interventions are limited in their effect. We see for example that the Sector Education and Training Authorities (SETAs) struggle with delivery, due to their own skill and leadership deﬁcits, but also because they have to remedy the educational deﬁcits of the majority of those who use their programmes. The billions to be spent on Adult Basic Education and preschool instruction raise the question – who is going to ensure that such programmes will adequately equip those who participate in them when the school system itself is struggling to cope? The Department is grappling with the problem. It is time that provinces and teachers’ unions accept their responsibility for the failure to date, and get on board.
The Department of Education is moving to address its widespread incapacity in school management and in teachers’ instructional ability, but the fact that educational delivery is managed or mismanaged at provincial level adds another dimension of difﬁculty to turning this oil tanker. The pattern is increasingly that weak provinces are performing ever more weakly, adding to the inequality in our destructively unequal society. Further and higher education, technical skills and employment prospects, all are hobbled by the primary school deﬁcit, which in turn has its roots in teachers’ lack of instructional ability, together with poor leadership and management within schools and districts. These failures are at the root of the perpetuation of poverty.

Disputes about the degree of poverty and unemployment can often sound, to those who suffer them, like arguing whether the drowning man is under four or forty metres of water. But it is important to tell with poverty whether we are dealing with deeper pools left by a receding tide, or whether the tide is advancing. It is clear that the tide is not advancing, but for those in the intractable hollows and backwaters this offers little hope. Rather, rage at inequality is directed at the institutions and politicians that fail them. And thus we see the threat to democracy intensiﬁed. The legitimacy of liberation cannot be deployed to excuse another decade of failing the people.