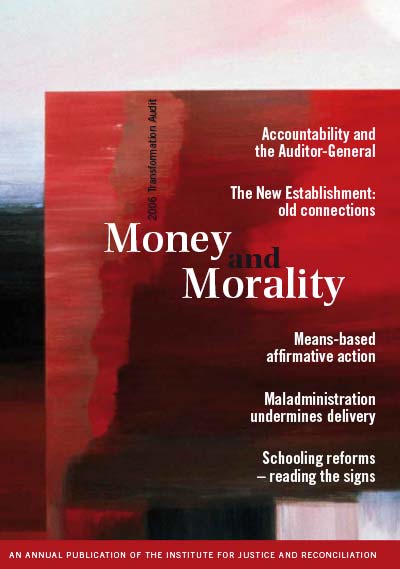 South Africans are struggling to characterise the times we are living through. Is this a time of deepening social grievance, of political patronage and plunder? Or is it a season of hope and previously unimaginable opportunity for the majority?

The 2006 Transformation Audit – Money and Morality is the third in a new series published by the Institute for Justice and Reconciliation. The series reviews the ways in which South Africa’s changing economic system affects our political and social landscape.

This edition focuses on social capital and accountability as well as corruption and its costs. Corruption is defined broadly to encompass legal corruption, including mismanagement, collusion, inertia and neglect, plus the more usual abuses of public office for private gain.

Citizens’ costs are not only counted in services or investments which do not arrive. Corruption can weaken the operation of public and civil institutions, as well as their public esteem. Judges and parliamentarians are not immune.

Popular grievance was already emerging towards the end of 2005. Bitter and often violent anger was directed against local government representatives countrywide in protest against inadequate service delivery. Organised labour has added its voice to the dissent and the challenge to the ANC leadership. In a period of increasingly vicious political contestation and widening black inequality, South Africans increasingly see officials at local, provincial and national level as arrogant or corrupt

Is the South African social contract of reconciliation and the rule of law under threat?