The historical record of the world has seen many cultural, ethnic and religious groups of people lost or destroyed by years of conquest, colonialism or plain genocide. This trend does not exclude Libya – we all know of the horrific acts committed by Muammar Gadaffi’s regime – however what has been largely unknown is the historical oppression of the indigenous Tebu group. Their struggle has remained largely unknown but NGOs such as the National Tebu Assembly would see the end to the marginalisation of their people. 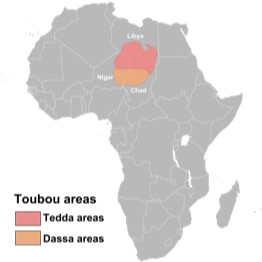 Tebu/Toubou/Tubu is collective term for several closely related nomadic tribes from the desert covering Libya, Chad & Niger. They speak a Latin script language called, Tebu. In Libya these indigenous people are a linguistic and ethnic minority who mainly resided in the desert between Murzuk and Al-Kufra. Prior to 1973 Libyan authorities paid little attention to the desert area where the Tebu stayed. However, in 1973 Gadaffi’s administration came to power, and one of the first things he did was declare the desert as a military base.

Their majority nomadic lifestyle meant that many Tebu people did not have national documentation. Moreover the forced removals from the desert rendered the Tebu people stateless and poverty stricken.

Despite this, Gadaffi’s army soon gained control of an area called the Aouzou strip and allowed Tebu people to register there as citizens. However, the catch was that in 1994 Chad gained control over the Aouzou strip, and later whose claim was accepted by the International Court of Justice. Once again the Tebu were left stateless and rejected by Libya.

The National Tebu Assembly, an advocacy NGO in Libya whose key role is to represent the political will of the Tebu, believe that although the Tebu weren’t directly targeted, they were clearly forced to register in Aouzou and as a result became stateless again when the power shift occurred. The NTA’s Mr. Mohammed A’Sunoussy presented this view in an interview in 2012.

Once again dispossessed, the Tebu travelled north between Murzuk and Al-Kufra. As long as they had their documents they were still considered Libyan. However in 1996 when Gadaffi passed the Revolutionary Council Decree No.12, which essentially declared all citizens with Aouzou documents as foreigners.

The decree worked quite strangely in that the authorities picked and chose when and how to implement it. Generally if the documents had Tebu script names many Arab authorities discriminated towards them. However, and this occurred very seldom, they were not bothered.

From a health and educational perspective this was particularly impactful. There are about 50% of Tebu people who are illiterate because without proper documentation they weren’t allowed to register at schools. Moreover Libya has a particularly bad health care system, many go outside the country to receive health care, but without proper documentation this was not possible for the Tebu.

Due to this discrimination the Tebu often mobilised and protested this treatment, often only resulting in temporarily improved treatment. Fed up, Gadaffi’s administration sought to silence this minority group, so in 2007 the 1996 decree was amended to specifically dispossess Tebu people. In an attempt to secure their survival the Tebu formed the Toubou Front for the Salvation of Libya (TFSL), an armed group that in 2008 staged an uprising that saw the deaths of 33 citizens before the government managed to squash the effort. Following this his administration was so determined that in 2009 the government began forced evictions and destroying Tebu homes. Moreover if these developments were met with protest they were either arrested or beaten.

Of course by 2011 Libya saw the beginning of the revolution. In an effort to bolster military forces the Gadaffi administration annulled the 1996 decree as to recruit the Tebu people to fight on his side. Similarly so the rebel forces also tried to convince them to join their forces, by not recognising the decree outright. Active Tebu individuals, motivated by years of oppression under Gadaffi’s rule, obviously sided with the rebels and played key roles in Qatran and Mursuk areas during the revolution. On the surface it seemed as though the Tebu were finally being recognised however A’Sunoussy reminds that this was only in the context of the revolution and in the interest of military advantage.

In October 2011, Gadaffi was assassinated and the rebel forces had successfully overthrown his regime. However after the regime change there was no communication between the new government and the Tebu people. As of 2012, the NTA reports that a majority of them reside within Murzuk and are generally treated as citizens with little fuss. However there is a large group that are still uneducated and impoverished, many of whom who still have not received new documents since their confiscation during 2007-2011. The new state has made no effort to re-invite the Tebu back into Libyan society and in some cases furthered their marginalisation, as seen during the elections where many were turned away as foreigners (citing the 1996 decree). Furthermore in 2012 “bloody clashes” between the Tebu and Arab tribesman broke out. Issa Abdel Majid Mansour, the leader of the Tebu at the time, stated that these actions have lead the Tebu people to believe that there are genocidal intentions towards the Tebu – threatening separatist movements and reigniting the TFSL.

The NTA see this persisting issue as not only extremely confusing but potentially detrimental. In some cases they are treated as citizens in other cases they are oppressed. The government for some reason have not made an effort to aid the Tebu and as a result left them in a fairly dangerous limbo between Libyan society and statelessness. Their land and cultural heritage was stolen and destroyed; they were given a national identity and allowed to ascertain new homes only to see them ripped away; they played a key role in liberating the Libyan state from its oppressors; but still they remain marginalised and stateless. This is a clear gross violation of their rights, and the new Libyan state should be obliged to remedy their situation. African cannot see the destruction of another indigenous group.

Kimal Harvey is a Peacebuilding Interventions intern working at the Institute of Justice and Reconciliation.