Freedom Day: A chance for South Africa to celebrate, remember and reflect

Annually, South Africa celebrates Freedom Day on 27 April in commemoration of the country’s first democratic election that took place on this day in 1994. This election, and its outcomes, paved the way towards a new democratic dispensation and a new constitution for South Africa[1].

Marking the end of over three hundred years of colonialism, as well as segregation and white minority rule under apartheid, the 1994 national election was the first in which all South Africans (18 years and older) could participate in. Freedom Day celebrations offer us the change to remember and celebrate that day as culmination of years of struggle for freedom[2]. It also gives us an opportunity to reflect on the change that has happened (or has not happened) since 1994. With the South African Reconciliation Barometer (SARB) we get some insight into South Africans’ perceptions in this regard.

The SARB is a public opinion survey conducted by the IJR, providing a nationally representative measure of citizens’ attitudes to national reconciliation, social cohesion broadly, transformation and democratic governance. The most recent survey was conducted during August and September 2015[3]. Respondents were asked “How would you say the following has changed since 1994, when the country became a democracy?” in relation to their and their family’s personal safety, economic circumstances, and employment opportunities. Respondents were furthermore asked how they think relations between members of different race group (race relations) and the gap between rich and poor (inequality) have changed since 1994[4].

Figure 1 below shows the responses to these SARB questions. In interpreting these findings, it is important to keep in mind what personal safety, race relations and socio-economic realities were like for many South Africans in 1994 which thus forms the basis from which change had to happen. 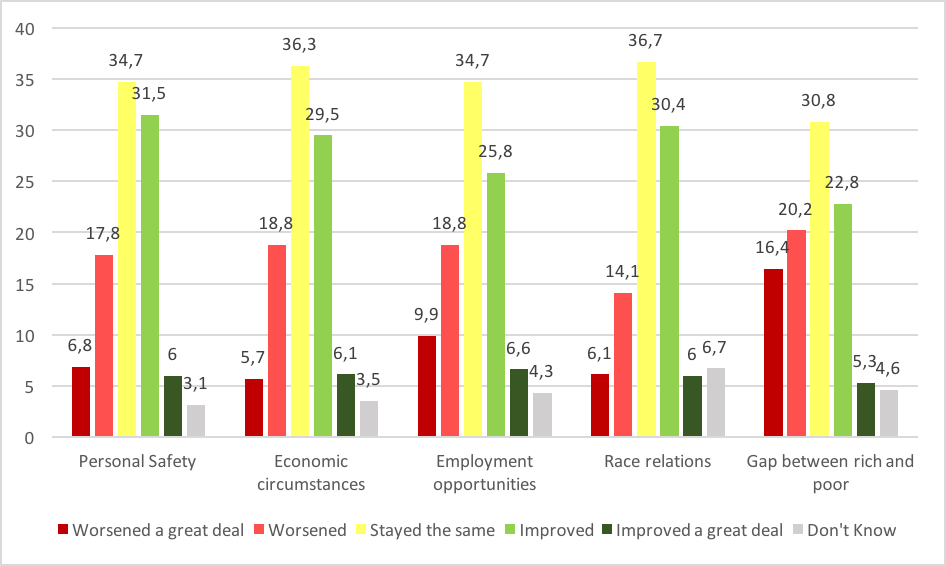 The findings in terms of economic circumstances and inequality as well as race relations is of particular importance, given that the 2015 SARB also found that most respondents believe that the objective of national reconciliation will remain impossible for as long as those who were disadvantaged under apartheid remain poor, as well as that inequality remains the most frequently mentioned source of social division within South Africa[5].

On 27 April, we celebrate and commemorate our country’s first democratic election as a culmination of many years of struggle and negotiation towards political freedom for all South Africans. The day also gives us an opportunity to reflect on the challenge our country still face such as crime, inequality, unemployment and racism – amongst others. From the 2015 SARB’s findings, it is also clear that – although some South Africans have seen some change in our society since 1994 – much works lies ahead as many South Africans experience personal safety, race relations and economic circumstances as unchanged / worse since 1994.    Freedom Day thus also serves as a reminder to us of the work that still needs to be done to address inequality, and in the promotion of the rights embodied in our constitution.

[3] The 2015 SARB round employed a multi stage cluster design, whereby enumerator areas (EAs) were randomly selected and, within each of these, households were randomly selected for visitation. At each household a systematic grid system was employed to select the specific respondent for an interview. The final obtained sample of 2 219 respondents was then weighted to represent the adult population of South Africa adequately.