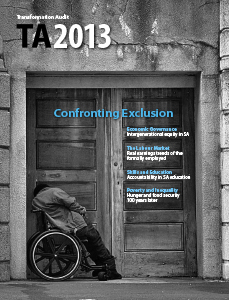 South Africa has made important political strides over the past two decades. It has created a framework of democratic legislative, executive and judicial institutions that mark a clear break from the apartheid past. In theory, they are inclusive and offer every citizen equal access to constitutionally protected rights. Their capacity to deliver, however, is coming under increasing pressure and, as this happens, citizen confidence in their efficacy is waning.

Much of the pressure, which ultimately may affect their legitimacy in the eyes of ordinary citizens, stems from the desperation and sense of economic exclusion experienced by those who find themselves at the wrong end of South Africa’s grossly unequal society. If this decline in trust persists, the cohesive effects of the country’s democratic institutions will diminish, and instability will become an increasingly common feature of political contestation.

An immediate, but only partial, remedy to the current state of affairs would be to prioritise transparency, accountability and leadership integrity within the system to restore trust in the bona fides of key institutions. The longer-term challenge will be to counter a growing sense of economic exclusion, where violent police action, rather than democratic process, is increasingly employed to stave off the manifestations of material anxiety experienced by struggling citizens. This edition of the Transformation Audit, titled ‘Confronting Exclusion’, focuses on instances of such exclusion but, as in previous years, also prioritises the search for inclusive economic policy and future strategies to address them. By looking at each of the four chapter areas, it seeks to find answers to the challenge of a society in which the promise of true freedom and equal rights will remain only that until people feel equipped to be in charge of their own destiny and that of their children.