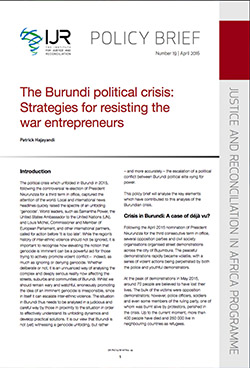 The political crisis which unfolded in Burundi in 2015, following the controversial re-election of President Nkurunziza for a third term in office, captured the attention of the world. Local and international news headlines quickly raised the spectre of an unfolding ‘genocide’. World leaders, such as Samantha Power, the United States Ambassador to the United Nations (UN), and Louis Michel, Commissioner and Member of European Parliament, and other international partners, called for action before ‘it is too late’. While the region’s history of inter-ethnic violence should not be ignored, it is important to recognise how elevating the notion that genocide is imminent can be a powerful aid for those trying to actively promote violent conflict – indeed, as much as ignoring or denying genocide. Whether deliberate or not, it is an unnuanced way of analysing the complex and deeply serious reality now affecting the streets, suburbs and communities of Burundi. Whilst we should remain wary and watchful, erroneously promoting the idea of an imminent genocide is irresponsible, since in itself it can escalate inter-ethnic violence. The situation in Burundi thus needs to be analysed in a judicious and careful way by those in proximity to the situation in order to effectively understand its unfolding dynamics and develop practical solutions. It is our view that Burundi is not (yet) witnessing a genocide unfolding, but rather – and more accurately – the escalation of a political conflict between Burundi political elite vying for power.
This policy brief will analyse the key elements which have contributed to this analysis of the Burundian crisis.
DOWNLOAD