Policy Brief No 10: The African Union and the International Criminal Court 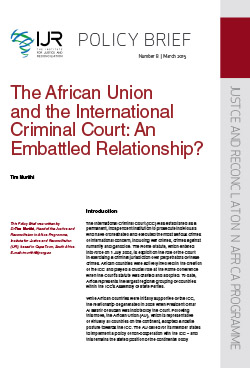 Policy Brief No 10: The African Union and the International Criminal Court: An embattled relationship?

The International Criminal Court (ICC) was established as a permanent, independent institution to prosecute individuals who have orchestrated and executed the most serious crimes of international concern, including war crimes, crimes against humanity and genocide. The Rome Statute, which entered into force on 1 July 2002, is explicit on the role of the Court in exercising a criminal jurisdiction over perpetrators of these crimes. African countries were actively involved in the creation of the ICC and played a crucial role at the Rome conference when the Court’s statute was drafted and adopted. To date, Africa represents the largest regional grouping of countries within the ICC’s Assembly of State Parties.

While African countries were initially supportive of the ICC, the relationship degenerated in 2008 when President Omar Al Bashir of Sudan was indicted by the Court. Following this move, the African Union (AU), which is representative of virtually all countries on the continent, adopted a hostile posture towards the ICC. The AU called for its member states to implement a policy of non-cooperation with the ICC – and this remains the stated position of the continental body.

This article discusses the trajectory of Africa’s relationship with the ICC and offer insights into how this embattled relationship might be repaired. Without bridging these differences the ability of the Court to work actively to address impunity, which is also the stated aim of the AU, will be undermined across the African continent.