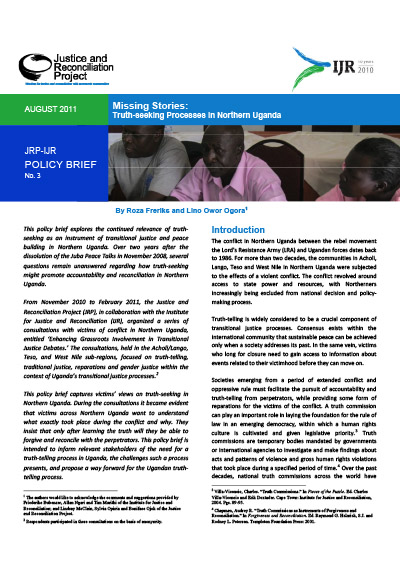 By: Roza Freriks and Lino Owor Ogora
Pages: 8
Dimensions: A4
Date of publication: 2011

This  policy  brief  explores  the  continued  relevance  of  truth‐seeking as an instrument of transitional justice and peace building  in  Northern  Uganda.  Over  two  years  after  the  dissolution of the Juba Peace Talks in November 2008, several questions  remain  unanswered  regarding  how  truth‐seeking  might promote accountability and reconciliation in Northern Uganda.

From  November  2010  to  February  2011,  the  Justice  and  Reconciliation Project (JRP), in collaboration with the Institute for  Justice  and  Reconciliation  (IJR),  organized  a  series  of  consultations with victims of conflict in Northern Uganda, entitled  ‘Enhancing  Grassroots  Involvement  in  Transitional  Justice Debates.’ The consultations, held in the Acholi/Lango, Teso,  and  West  Nile  sub‐regions,  focused  on  truth‐telling,  traditional justice, reparations and gender justice within the context of Uganda’s transitional justice processes.

This  policy  brief  captures  victims’  views  on  truth‐seeking  in  Northern Uganda. During the consultations it became evident that  victims  across  Northern  Uganda  want  to  understand  what exactly took place during the conflict and why. They insist  that  only  after  learning  the  truth  will  they  be  able  to  forgive and reconcile with the perpetrators. This policy brief is intended  to  inform  relevant  stakeholders  of  the  need  for  a  truth‐telling process in Uganda, the challenges such a process presents, and propose a way forward for the Ugandan truth‐telling process.