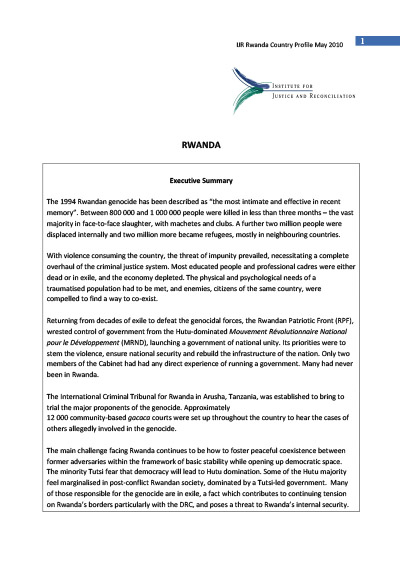 The 1994 Rwandan genocide has been described as “the most intimate and effective in recent memory”. Between 800 000 and 1 000 000 people were killed in less than three months – the vast majority in face-to-face slaughter, with machetes and clubs. A further two million people were displaced internally and two million more became refugees, mostly in neighbouring countries.

With violence consuming the country, the threat of impunity prevailed, necessitating a complete overhaul of the criminal justice system. Most educated people and professional cadres were either dead or in exile, and the economy depleted. The physical and psychological needs of a traumatised population had to be met, and enemies, citizens of the same country, were compelled to find a way to co-exist.

Returning from decades of exile to defeat the genocidal forces, the Rwandan Patriotic Front (RPF), wrested control of government from the Hutu-dominated Mouvement Révolutionnaire National pour le Développement (MRND), launching a government of national unity. Its priorities were to stem the violence, ensure national security and rebuild the infrastructure of the nation. Only two members of the Cabinet had had any direct experience of running a government. Many had never been in Rwanda.

The International Criminal Tribunal for Rwanda in Arusha, Tanzania, was established to bring to trial the major proponents of the genocide. Approximately
12 000 community-based gacaca courts were set up throughout the country to hear the cases of others allegedly involved in the genocide.

The main challenge facing Rwanda continues to be how to foster peaceful coexistence between former adversaries within the framework of basic stability while opening up democratic space. The minority Tutsi fear that democracy will lead to Hutu domination. Some of the Hutu majority feel marginalised in post-conflict Rwandan society, dominated by a Tutsi-led government. Many of those responsible for the genocide are in exile, a fact which contributes to continuing tension on Rwanda’s borders particularly with the DRC, and poses a threat to Rwanda’s internal security.