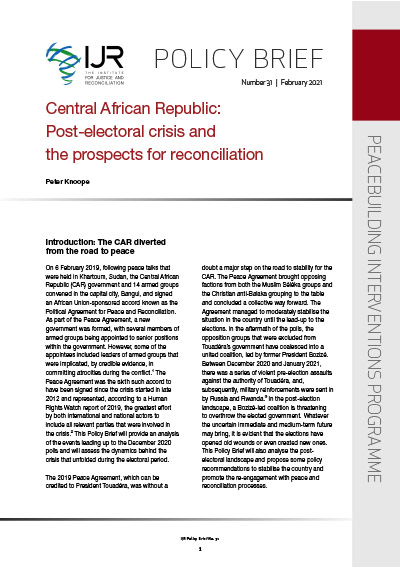 Introduction: The CAR diverted from the road to peace

On 6 February 2019, following peace talks that were held in Khartoum, Sudan, the Central African Republic (CAR) government and 14 armed groups convened in the capital city, Bangui, and signed an African Union-sponsored accord known as the Political Agreement for Peace and Reconciliation. As part of the Peace Agreement, a new government was formed, with several members of armed groups being appointed to senior positions within the government. However, some of the appointees included leaders of armed groups that were implicated, by credible evidence, in committing atrocities during the conflict. The Peace Agreement was the sixth such accord to have been signed since the crisis started in late 2012 and represented, according to a Human Rights Watch report of 2019, the greatest effort by both international and national actors to include all relevant parties that were involved in the crisis. This Policy Brief will provide an analysis of the events leading up to the December 2020 polls and will assess the dynamics behind the crisis that unfolded during the electoral period.

The 2019 Peace Agreement, which can be credited to President Touadéra, was without a doubt a major step on the road to stability for the CAR. The Peace Agreement brought opposing factions from both the Muslim Séléka groups and the Christian anti-Balaka grouping to the table and concluded a collective way forward. The Agreement managed to moderately stabilise the situation in the country until the lead-up to the elections. In the aftermath of the polls, the opposition groups that were excluded from Touadéra’s government have coalesced into a united coalition, led by former President Bozizé.Between December 2020 and January 2021, there was a series of violent pre-election assaults against the authority of Touadéra, and, subsequently, military reinforcements were sent in by Russia and Rwanda.3 In the post-election landscape, a Bozizé-led coalition is threatening to overthrow the elected government. Whatever the uncertain immediate and medium-term future may bring, it is evident that the elections have opened old wounds or even created new ones. This Policy Brief will also analyse the postelectoral landscape and propose some policy recommendations to stabilise the country and promote the re-engagement with peace and reconciliation processes.