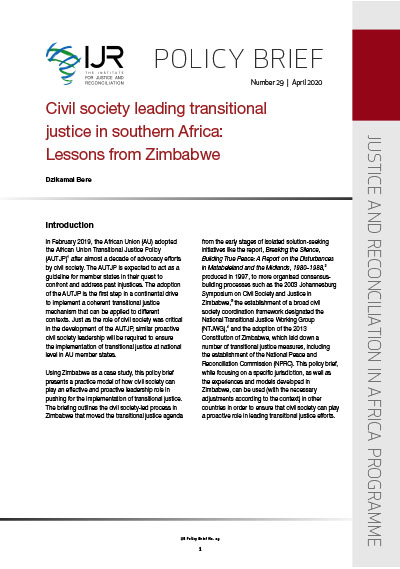 In February 2019, the African Union (AU) adopted the African Union Transitional Justice Policy (AUTJP) after almost a decade of advocacy efforts by civil society. The AUTJP is expected to act as a guideline for member states in their quest to confront and address past injustices. The adoption of the AUTJP is the first step in a continental drive to implement a coherent transitional justice mechanism that can be applied to different contexts. Just as the role of civil society was critical in the development of the AUTJP, similar proactive civil society leadership will be required to ensure the implementation of transitional justice at national level in AU member states.

Using Zimbabwe as a case study, this policy brief presents a practice model of how civil society can play an effective and proactive leadership role in pushing for the implementation of transitional justice. The briefing outlines the civil society-led process in Zimbabwe that moved the transitional justice agenda from the early stages of isolated solution-seeking initiatives like the report, Breaking the Silence, Building True Peace: A Report on the Disturbances in Matabeleland and the Midlands, 1980–1988, produced in 1997, to more organised consensus-building processes such as the 2003 Johannesburg Symposium on Civil Society and Justice in Zimbabwe, the establishment of a broad civil society coordination framework designated the National Transitional Justice Working Group (NTJWG),4 and the adoption of the 2013 Constitution of Zimbabwe, which laid down a number of transitional justice measures, including the establishment of the National Peace and Reconciliation Commission (NPRC). This policy brief, while focusing on a specific jurisdiction, as well as the experiences and models developed in Zimbabwe, can be used (with the necessary adjustments according to the context) in other countries in order to ensure that civil society can play a proactive role in leading transitional justice efforts.