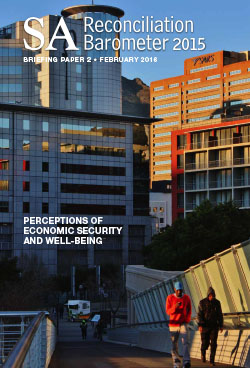 Dimensions: A4
Pages: 22
Date of publication:  2016
By: Jan Hofmeyr and Rajen Govender

In the first set of results that were released from the 2015 South African Reconciliation Barometer (SARB) Survey, it was reported that more than two-thirds of respondents felt that they have little to no trust in South Africans of racial groups other than their own. Furthermore, the survey found that a majority of respondents identified the gap between rich and poor as the most divisive aspect of society, which continues to keep us apart. This briefing reports on ordinary South Africans’ sense of economic security, their sense of deprivation, how they view their own financial situation in relation to others, and whether they feel that progress has been made in addressing the economic backlogs caused by apartheid. Our findings point to a persistence of racialised responses and experiences in terms of the economic security of ordinary citizens. Against the backdrop of a tough economic environment in 2016, social relations are likely to be put under further strain.