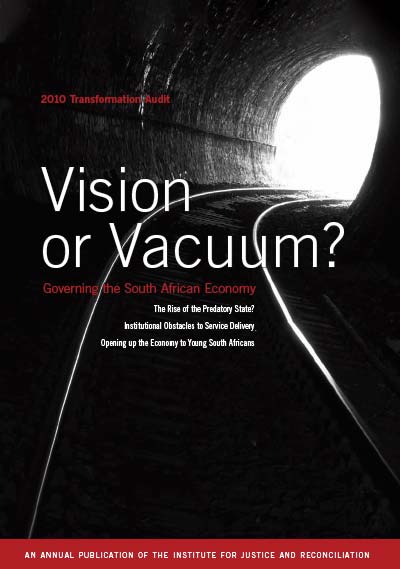 Although the global recession has come and gone, the world economy still finds itself in crisis at the end of 2010. As the United States returns to growth in the wake of a sub-prime crisis that contaminated the rest of the global economy, trouble in the Eurozone is likely to prolong the sluggish global recovery.

As a result of the crisis, the South African economy shed 1.1 million workers between the fourth quarter of 2008 and the second quarter of 2010, and the trend continues unabated. Compared to the more subdued impact on the labour markets of its peers, which experienced larger declines in GDP growth, the extent of job losses should be of significant concern. The impact of the crisis stretches far beyond the labour market, and affects the most vulnerable disproportionately.

The recession has reminded South Africans, once again, of the structural weaknesses in their economy, which render it highly vulnerable to temporal shocks. This certainly demands critical reflection on the current composition of the economy, its governance and longer-term capacity to create a more just and equitable society. The 2010 Transformation Audit’s theme – Vision or Vacuum? – sets out to pose critical questions in this regard. While acknowledging the constraints inherent in the prevailing global environment, this edition asks what the country can do to sustain its developmental achievements amidst crises.

The contributions to this edition look at this challenge from the perspectives of the Audit’s four focal areas and provide insightful analysis, which is sure to enrich public debate on a longer-term vision for the South African economy.