Changing the World One Child at a Time: The Youth Identity Project Leaders with the Youth of Calitzdorp 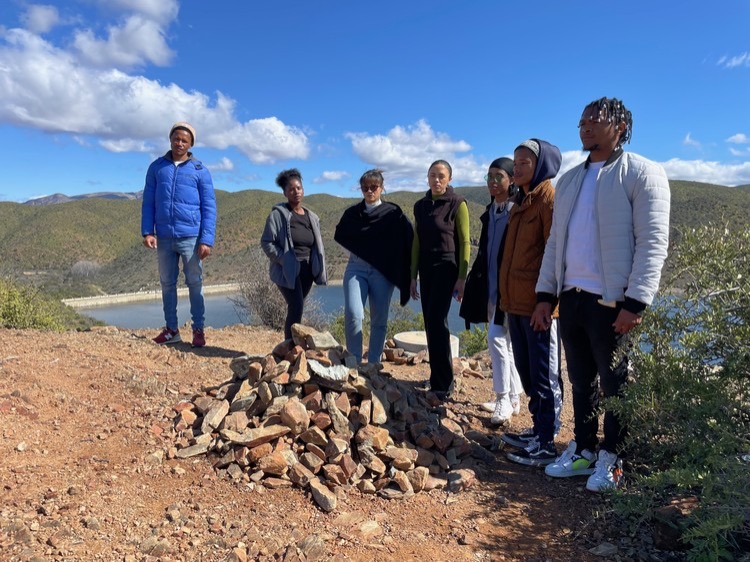 From the field article below:

Recently, the Youth Identity project travelled to Calitzdorp to complete the last of its four-part dialogue series with young people in the area. The conversations, that took off last year, focused on Coloured* youth perceptions of belonging, exclusion, and dignity in the community. As facilitators, we asked young people questions, such as, “Do you feel you belong here? What are the stereotypes that are held against young people who look like you? Do you feel that young people in Calitzdorp have a future?” The answers we received were overwhelmingly bleak. Young people reported back on experiences of exclusion, non-belonging, and other social injustices. They were candid about the effects of these injustices on them as individuals and the community that they were a part of, but felt they did not belong to.

As conversations deepened, it became evident that the challenges young people endured such as fragmented identity, relational divisions, and exclusion, had a historical genesis that dated back to their parents’ experiences of apartheid, and even before. Much of the current struggles young people lugged that included poverty, addiction, and other deprivations were not theirs, but passed on from previous generations. As the project team, we understood that we wouldn’t be able to continue conversations on youth identity and youth leadership development without first addressing the trauma young people had undergone and continued to live through. We took to unpacking trauma itself- how is trauma defined, how does it manifest; what are triggers, and how do we react to trauma within ourselves as well as others? The dialogues were emotionally taxing, but necessary since we hoped to foster healthy leadership qualities within the young participants.

Eventually we progressed to ways of healing our wounds and honed on indigenous tools for metabolising trauma- tools that were not only familiar within our culture, but accessible to us too. We explored play therapy, arts, dance and movement therapy, as well as meditative walking. In our exploration and reconnection with our inner child, we came to understand that healing was not solely an individual effort, but communal too of which a significant part of the healing was relational. Relational recovery was significant in a context wherein distrust thrived and people isolated themselves from one another. Young people conveyed their dreams for themselves and their community, but felt unsupported and disconnected; their input undervalued, when acknowledged at all. Their anxieties worried us as facilitators since young people were the so-called future leaders of South Africa. However, in the context wherein we worked, we witnessed young people occupy existing leadership roles in their community that effectively made them wounded ‘right-now leaders’.

Since healthy youth identity and leadership development were primary objectives of the Youth Identity project, it would stand to reason that healing past trauma was imperative to becoming an effective and conscious leader.

The implications of trauma, especially trauma that accumulated in childhood, are complex on the leadership spectrum. Leaders who have not yet transmuted traumatic experiences tend to be myopic, distrusting, inflexible and inconsiderate of others. In contrast, leaders who have confronted their woundedness and actively sought to heal from it are more trusting, open-minded, adaptable, and considerate of those they lead. Leaving trauma to fester or deepen over time hinders relationship building which is crucial to fostering peaceful communities and vibrant democratic societies, generally.

Since the youth we worked alongside had undergone a process of understanding their traumas and triggers, and workshopped ways of healing from that which wounded them, they showed increased signs of socio-emotional intelligence: they were more willing to listen for the benefit of understanding their peers; they were able to distinguish when their peers reacted from a place of trauma and responded accordingly and proportionally. Moreover, they were more enthusiastic to support and assist where their help was needed or asked for. This was, especially, evident on the day of our public event, which we named ‘Catalysts for Change’ and to which a youth ambassador aptly added “My life, my responsibility”.

This particular youth ambassador- Christopher Tarentaal- spoke at length about the importance of breaking the cycles of trauma and healing from wounds. He rightly said that each person’s trauma was valid and stressed the necessity of confronting those traumas. Christopher problematised a popular idiomatic expression that went, “’n stil bek is ‘n heel bek”, saying that “’n stil bek is ‘n getraumatiseerde lewe”. He went on to say that community leaders- including household leaders- were traumatised. He held that parents were hurt and their hurt often meant that they were absent in their children’s lives. Their absenteeism then went on to ignite new trauma in the lives of their children. Christopher ended by emphasising the importance of speaking openly about the experiences that broke us for the purpose of healing. If we did not urgently commit to healing, we would only break down further and drag others along in our brokenness. Watch what some of our ambassadors had to say: https://bit.ly/3LurABL

Each young person agreed and committed to continue the work of healing from past experiences first started in our conversations of 2021.

The unexpected highlight of the public event were children in the audience who witnessed older youth leading and participating in processes that were affirming; speaking openly and frankly about their traumas and encouraging vulnerability and healing. This was significant in a context where children may not have positive representations of leadership. Perhaps unknowingly, young people there became role models for children and displayed healthier versions of not only leadership, but also human-being.

The Youth Identity project’s time in Calitzdorp was an arduous journey that remains incomplete. While young people are now more cognisant of the self-care and communal care tools at their disposal, those tools will not magically rescue them from material deprivation. Much more work is required in different spheres- socio-emotional development, skills capacitation, increased and accessible opportunities, and strengthened support networks- and we cannot do it alone.

The project team of the Youth Identity project welcomes opportunities to collaborate in Calitzdorp, focusing extensively on skills capacitation and development for young people in the area.

*We understand the problematic nature of the term ‘Coloured’ and note that not every young person in the space identified as such. Some saw themselves as KhoiKhoi and Bushman. And so, even in discussing “Colouredness”, we problematized the term and unpacked it.

Translation: ‘n stil bek is ‘n heel bek means, a closed mouth doesn’t risk injury to self or others. Christopher reframed the expression, saying that a closed mouth means a traumatised life.