A joint training by the Institute for Justice and Reconciliation (IJR) and the In-Transformation Initiative (ITI). 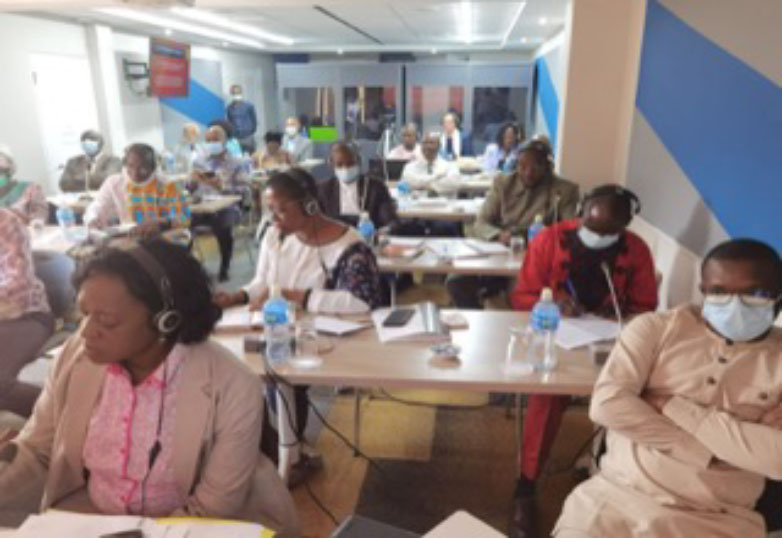 From 13-17 September 2021, the IJR and ITI held a learning visit for the new appointees of the Truth, Justice, Reparations and Reconciliation Commission (Commission Vérité, Justice, Réparations et Réconciliation, CVJRR) from the Central African Republic (CAR). The high-level delegation attended a workshop in Pretoria, which focused on sharing South Africa’s practical experiences on transitional justice, as well as lessons and insights applicable to the CAR Commission.

The workshop was facilitated by Fanie du Toit, former IJR Executive Director and currently an Associate of ITI. Professor Tim Muruthi, acting head of the Peacebuilding Interventions Team at IJR, spoke on the AU’s Transitional Justice Policy, while Friederike Bubenzer from the IJR discussed mental health and psychosocial support.

Mr. Roelf Meyer from ITI, a South African politician and businessman famous for his leading role in negotiating an end to apartheid in South Africa opened the workshop. Johnny Pitswane, Director of Foreign Service from the Department of International Relations and Cooperation (DIRCO) and Ambassador Boniswa Ramalebana, South African Ambassador to the CAR, also presided over the ceremony.

The opening sessions focused on situating the Commission in the context of the Bangui Forum, popular grassroots consultations that were held in 2015 and demanded the adoption of a truth commission. The 2019 Political Agreement for Peace and Reconciliation (APPR) in the Central African Republic signed in Khartoum further affirmed this desire. These sessions were led by Ambassador Matias Bertino Matondo, Special Representative of the Chairperson of the African Union (AU) Head of the AU Mission for CAR and Ambassador Adolphe Nahayo, Representative of the President of the Economic Community of Central African States (ECCAS) in CAR.

Former TRC Commissioner Honourable Justice Dumisa Ntzebesa gave the background behind making a case for conditional amnesty at the turn of South Africa’s Truth and Reconciliation Commission (TRC). He explained how the 1993 Constitution and the Promotion of National Unity Information Act had both recognized the need for reconciliation and that there had been a case for arguing that reconciliation would be a product of the truth, and that full disclosure and acknowledgement of wrongdoing was, in itself, a form of truth. He argued that the compromise on amnesty had allowed the new government to use additional levers of influence once it was in power. Truth was therefore also critical for CAR.

Former TRC Commissioner and prominent international criminal law expert Yasmin Sooka spoke on main considerations for the justice pillar and on gender. Sooka outlined issues of individual and collective responsibilities, different categories of crime and modes of participation. She explained that there were now mechanisms that allowed prosecutions to be pursued at a later stage and cited the need to prioritise certain events. On gender, she emphasized the need to develop a tailored gendered approach and to look beyond sexual and gender-based violence (SGBV) to patterns of abuses and broader systemic issues.

Former TRC Investigator and activist Piers Pigou spoke on different types of reparations – a key focus on the CVJRR – and one of the greatest criticisms of the South African process as it was deemed insufficient and not visible enough. He outlined the need to ensure that reparations were a legal obligation to ensure that recommendations were acted upon. Pigou also spoke on memorialization with regards to the need for consultative processes that avoided polarization, and on the need for the monitoring and implementation of recommendations.

Presentations were also made by former South African TRC Commissioners. Dr Biki Minyaku, former CEO of the TRC, and Faizel Randera, a Former TRC Commissioner, led a session on the organization of the TRC, including the need for multi-stakeholder engagement, such as civil society, the media, and religious leaders, and research support. Ambassador Geoff Doidge also headed up the final session talking about interventions that can be made beyond the Truth Commission.

The workshop culminated in a strong relationship between the IJR/ ITI and the Commissioners and reflects the organisations’ desires to support sustainable peace in CAR. IJR/ITI has already signed a Memorandum of Understanding with the Ministry of Humanitarian Affairs and Reconciliation in CAR, which is linked to the Commission. IJR is also supporting the work of Local Peace and Reconciliation Committees (LPRCs) in CAR.

IJR therefore continues to work at multiple levels to support the role of local, national and regional actors in building a lasting peace. IJR is committed to building peaceful, democratic, and fair societies and believes in the importance of transitional justice around the continent.