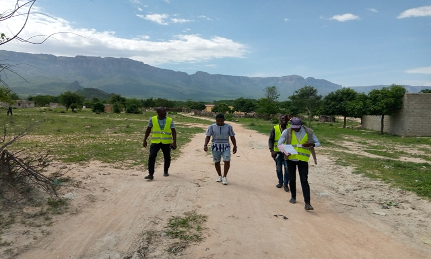 In November 2019, two member of the Research and Policy team, Anyway Chingwete and Dominique Dryding, left for Angola to conduct two fieldworker training workshops and to observe fieldwork for the Round 8 Afrobarometer* survey in Angola.

The first fieldworker training workshop was held in Luanda and was held over a period of 7 days. 5 days were spent in a classroom style setting as we trained the fieldworkers in the research methodology used for the project and familiarised them with the questionnaire in Portuguese and local languages. Fieldworkers were then broken up into teams of 5 to conduct the pilot. During the pilot, fieldworkers have to complete two full interviews in pre-selected areas close to the training venue. This was followed by a debriefing session in which we discussed any challenges that fieldworkers experienced and devised possible solutions. The Portuguese and local language translations were also refined to better reflect the spoken language of the country. Once the debriefing session was complete, the final team selection took place and supervisors were trained on their roles and responsibilities during the fieldwork period.

Some of the areas which were selected in the sample were villages inaccessible to cars. Fieldworkers and the observation team therefore used motorbike taxis or walked to ensure that the representativeness of the respondents was maintained.

In addition to transport challenges and navigating an often poor road network, there were numerous other challenges which the field teams and our national partner overcame during the fieldwork process. This included obstructions from local officials, adverse weather conditions and exhaustion but they managed to overcome all of these obstacles to successfully complete fieldwork in Angola.

The importance of this project for Angola cannot be underestimated as it was the first survey of its kind in the country. With the data that the survey produces, various stakeholders will get a better understanding of people’s perception of governance and democracy in the country. In addition to completing the Angola survey, IJR’s Afrobarometer team has completed surveys in Botswana, Namibia and Lesotho.

*Afrobarometer directs a pan-African, nonpartisan research network that conducts public attitude surveys on democracy, governance, economic conditions, and related issues in African countries. The Southern African project management team is housed at the institute for Justice and Reconciliation. Seven rounds of surveys were completed in up to 38 countries between 1999 and 2018. Round 8 surveys in 2019/2020 are planned in at least 35 countries. Afrobarometer conducts face-to-face interviews in the language of the respondent’s choice with nationally representative samples.