IJR at the 2019 Potsdam Spring Dialogues in Germany 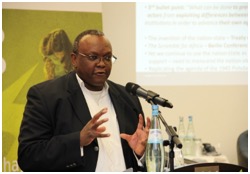 The IJR took part in the 16-17 June 2019 edition of the Spring Dialogues, held in the picturesque and historical city of Potsdam, just outside Berlin. The Potsdam Spring Dialogues were originally convened to build bridges and foster common understanding. The Foundation states that it is:

“United by the vision of a world without borders and without prejudice, without hunger or fear of destruction. We know that this vision will not become a reality today or tomorrow. But we wish to commit ourselves to making our way, step by step, towards that goal. The future of humankind depends on regarding ourselves as world citizens and on our acting with a sense of global responsibility.”

This year’s discussions in Potsdam explored how strengthening African peace and security capacities could lead to greater ownership. The Dialogues also considered the specific security challenges in the regions, and interrogated how cooperation between the AU, regional organisations and sub-regional partnerships can be strengthened. The meeting was attended by a number of key African leaders from the African Union, government diplomats, politicians, academics, civil society practitioners and members of the African Diaspora in Germany. The IJR’s Head of Peacebuilding Interventions, Prof. Tim Murithi, gave the keynote address at this year’s Postdam Spring Dialogues on the topic of “The Pathways to Ownership of Africa’s Regional Peace and Security“. He spoke specifically on regrettable lack of ownership of Africa’s security processes and institutions, and a persistent factor of “outsourcing” efforts to promote peacebuilding initiatives on the continent. Prof. Murithi called for a shift in the mindset of African leaders and citizens to ensure that they assert ownership of their internal initiatives to promote peace and security. He also argued for the need to change the frame of reference from the state-focused efforts to promote peace towards a regional reconciliation framework, which recognizes the necessity to work on post-conflict reconstruction and transitional justice across borders.

The Potsdam Spring Dialogues were established by the Development and Peace Foundation (SEF), which was founded by one of Germany’s Noble Prize Winners Willy Brandt, with the objective at that time of fostering dialogues among constituency that would typically not meet each other in the course of their work. (Article contribution: Tim Murithi)