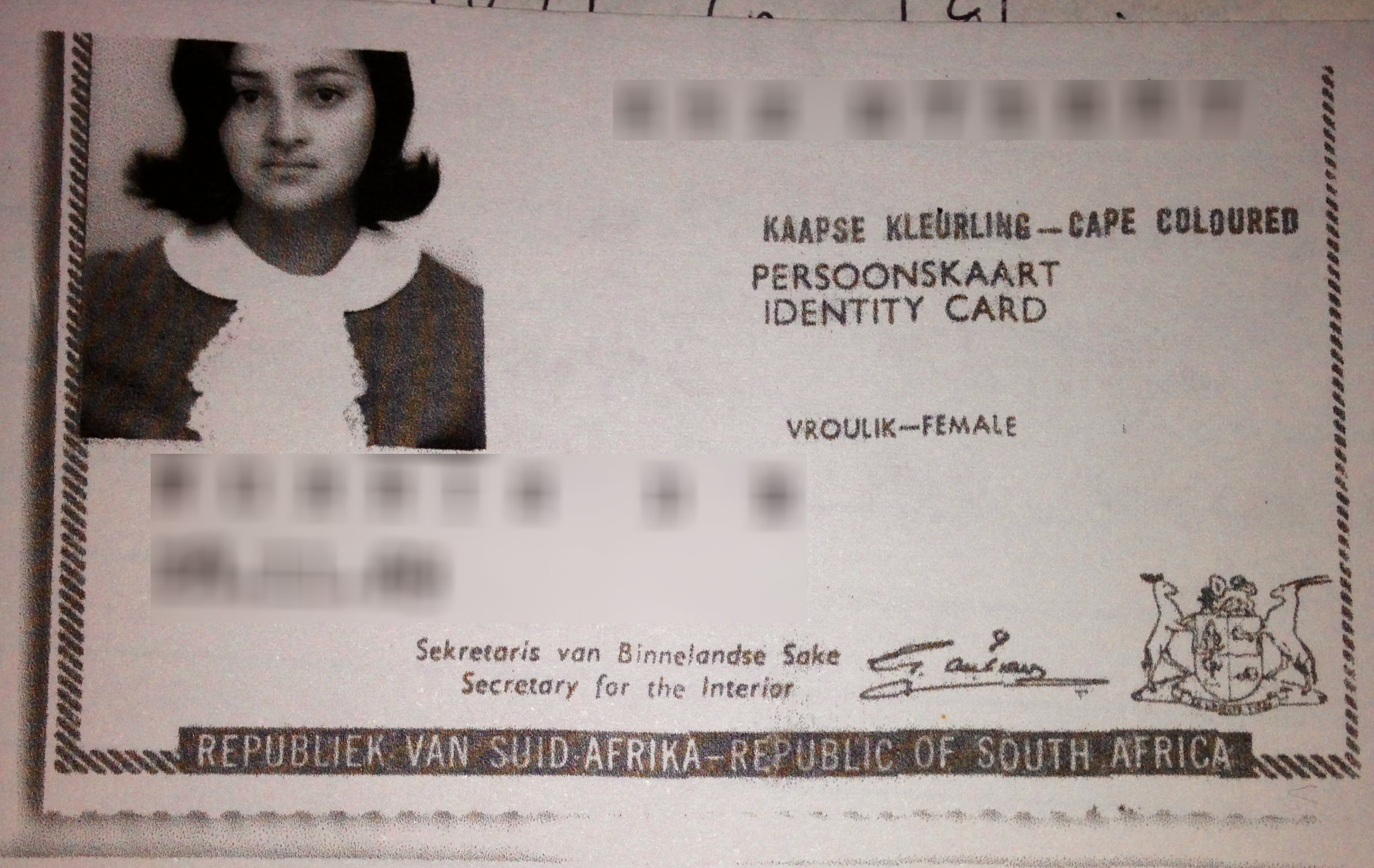 Coloured identity is fraught with ambiguity and often inhabits a shape-shifting shadow world, floating and flowing between arbitrary apartheid racial categories – an identity neither here nor there. While racial classifications under white supremacist South Africa appeared definitive and rigid, coloured people frequently drifted between them depending on their proximity to any of the regime’s racial groupings. The architects of apartheid officiated the term ‘Coloured’ as a derogatory label used to denigrate peoples of mixed ancestry. They then lumped together these heterogeneous folk presenting them as a single community. But as has been repeatedly pointed out, the process of racial classification was not so simple or flawless, and mixed race people who were white-passing were often classified as such, as were white people who lacked stereotypical white features ousted from their racial community and dumped elsewhere.

Forced removals and displacement was integral to the formation of Coloured identity within the Western Cape, particularly. Apartheid’s Group Areas Act, which lent unjust legitimacy to forced removals, violently uprooted entire communities, separating families and then dumping them on the outskirts of the city, isolated and excluded from economic opportunities and resources. It is the marginalisation of Coloured communities – their historiographical narrative reduced to a few throw-away comments – that was integral to the way in which the identity manifested itself socially and politically.

The displacement of Coloured people from their natal homes to racially defined townships, such as the Cape Flats, has often been a point of intense fixation for Coloured people. Following the mass social trauma of their removal and the uncertainty of their future, displaced Coloured people needed and built networks of trust, support and security with one another. They survived the pain of eviction and their subsequent move to the tundra by reminiscing with one another about the golden days in their destroyed communities – this is still done through the remembrance of life and times in District Six, for example, through David Kramer’s theatrical plays. The removal of Coloured people to the racially-characterised peripheries of the city ensured that they shared their memories almost exclusively with other Coloured people. Apartheid social engineering segregated spaces that severely limited racial interaction and integration, thereby ensuring that Coloured memories circulated solely between one another, and that consequently created an instinctive and mutually reinforcing pattern of narrative traffic. Over decades the perpetual transmission of these nostalgic stories has developed a narrative community among Coloured people in the townships.

Popular depictions, discussions and interpretations of Coloured identity and Coloured culture tend to centralise the most pejorative stereotypes previously peddled by the apartheid regime. Coloured culture – when not entirely denied of its existence – is frequently characterised around gangsterism, substance abuse, promiscuous youth and missing teeth. However, both the Black Consciousness Movement of the 1980s, as well as the democratic dispensation of 1994, provided opportunities for Coloured people to self-identify by reclaiming their history, heritage and complex identities that was stripped away during Apartheid. New conceptions of Colouredness emerged that included recognition of historical identities such as those of the Khoisan and Malay communities, for example, throughout South African history. Contrarily others have deliberately used the term Coloured to show that they have reclaimed it and imbued it with new political meaning. Coloured people now have the freedom to negotiate and reinterpret their mixed feelings and ambiguous identities in empowering ways.

Today there is an intense interest in the nature and history of Coloured identity. Until the late 1970s there was a high degree of consensus both within and outside the Coloured community about who Coloured people were and what the concept of ‘Colouredness’ embodied. Currently, however, Coloured identities are increasingly understood to be multiple, fluid and hybrid – Christian Coloureds, Muslim Coloureds, rural Coloureds, Afrikaaps, Afrikaans and English, and bi-racial Coloureds. This process of questioning and challenging – searching for some measure of collective identity in a society that is fragmented at all levels – is the project in which all South Africans are engaged in. Coloured identity is emerging from the stereotypes of the past and a new identity is being constructed, remaining true to the notion that an understanding of the past is crucial to the formation and socialisation of the future.