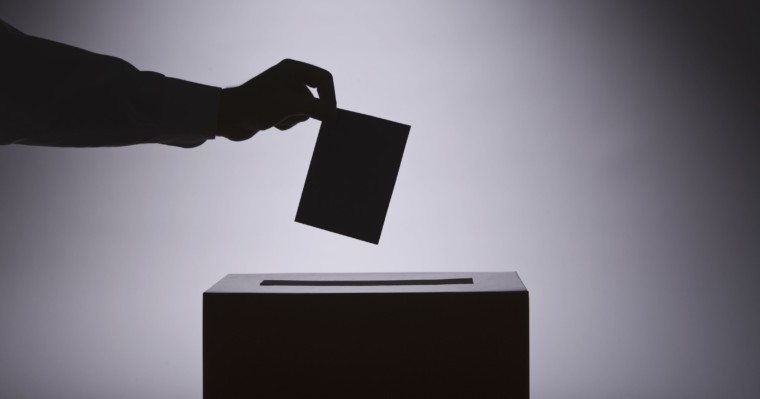 South Africa annually celebrates 27 April as Freedom Day, commemorating the first post-apartheid, non-racial and democratic elections held on 27 April 1994. Almost a quarter of a century later, and in the lead up to the 2019 national elections taking place next year, this is an opportune time to consider the status of democratic political culture in South Africa. As “citizen participation … is at the heart of democracy … [and,] democracy is unthinkable without the ability of citizens to participate freely in the governing process”,1 SA Reconciliation Barometer (SARB) Survey findings pertaining to political efficacy and political participation (as an aspect of South African democratic political culture) are reflected on here.

The SARB asks various questions pertaining to political efficacy. In 2017, a key finding in this regard pertained to low voting efficacy among South Africans, although they showed that the frustration with political engagement does not lie with the experience of lacking relevant information, but rather with the perceived functioning of the formal structures and processes that facilitate political participation (see figure 1). That is, the primary constraint to effective political participation (as expressed by citizens) stems not from citizens’ own perceived inadequate capacity to understand and participate in political processes and issues, but rather from the perceived lack of responsiveness of political institutions and actors to such citizen participation. In addition, confidence recorded in public institutions and national leadership (as part of the 2017 SARB round) – in particular, governmental structures and elected representatives – were low, and a comparison over time points to a process of systematic erosion2. 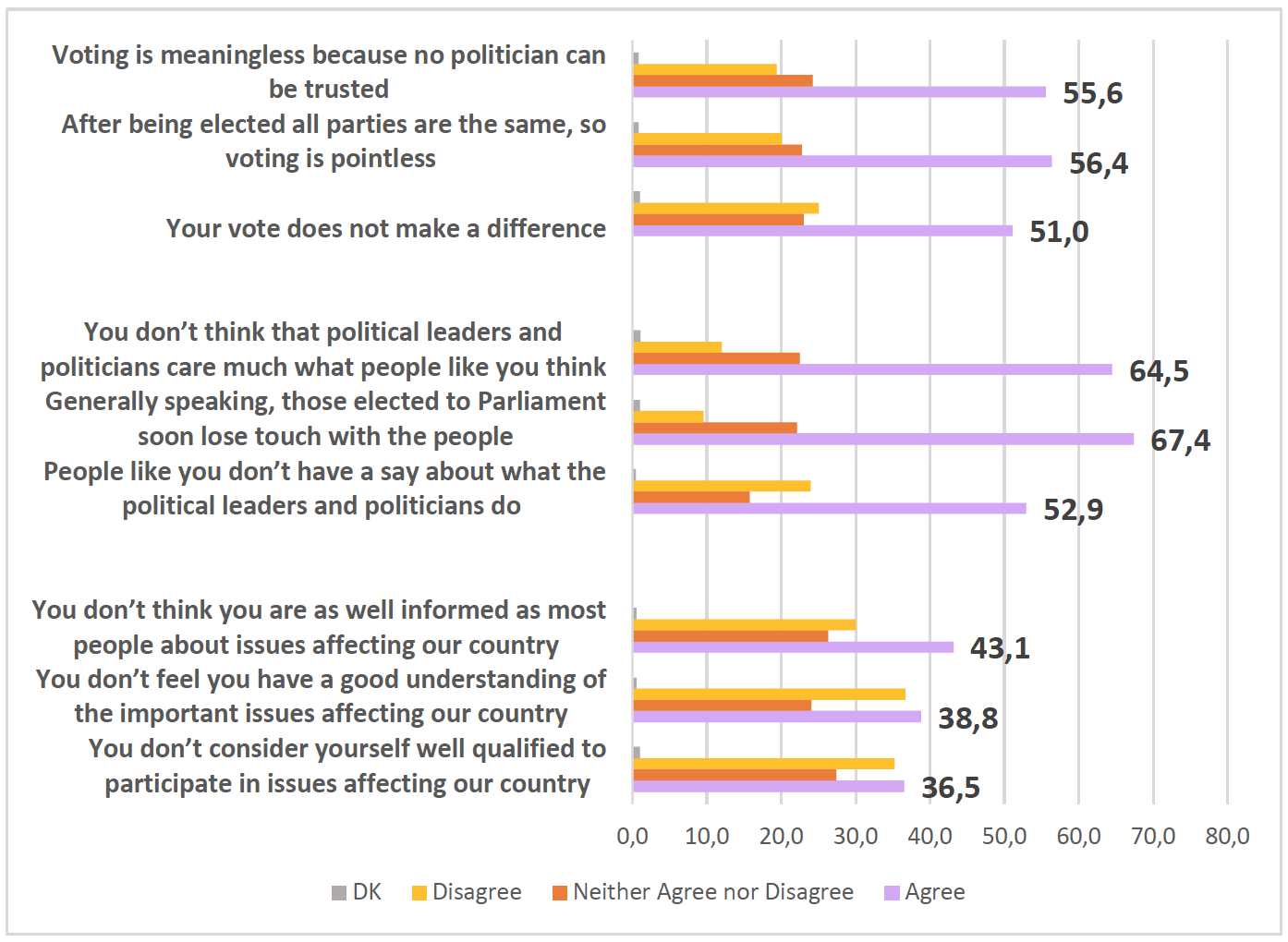 Coupled with the findings presented as part of figure 1, voter turnout data from the Independent Electoral Commission (IEC) show an increase in voter turnout for municipal elections, but a decrease in national voter turnout (as shown by figure 2 below). 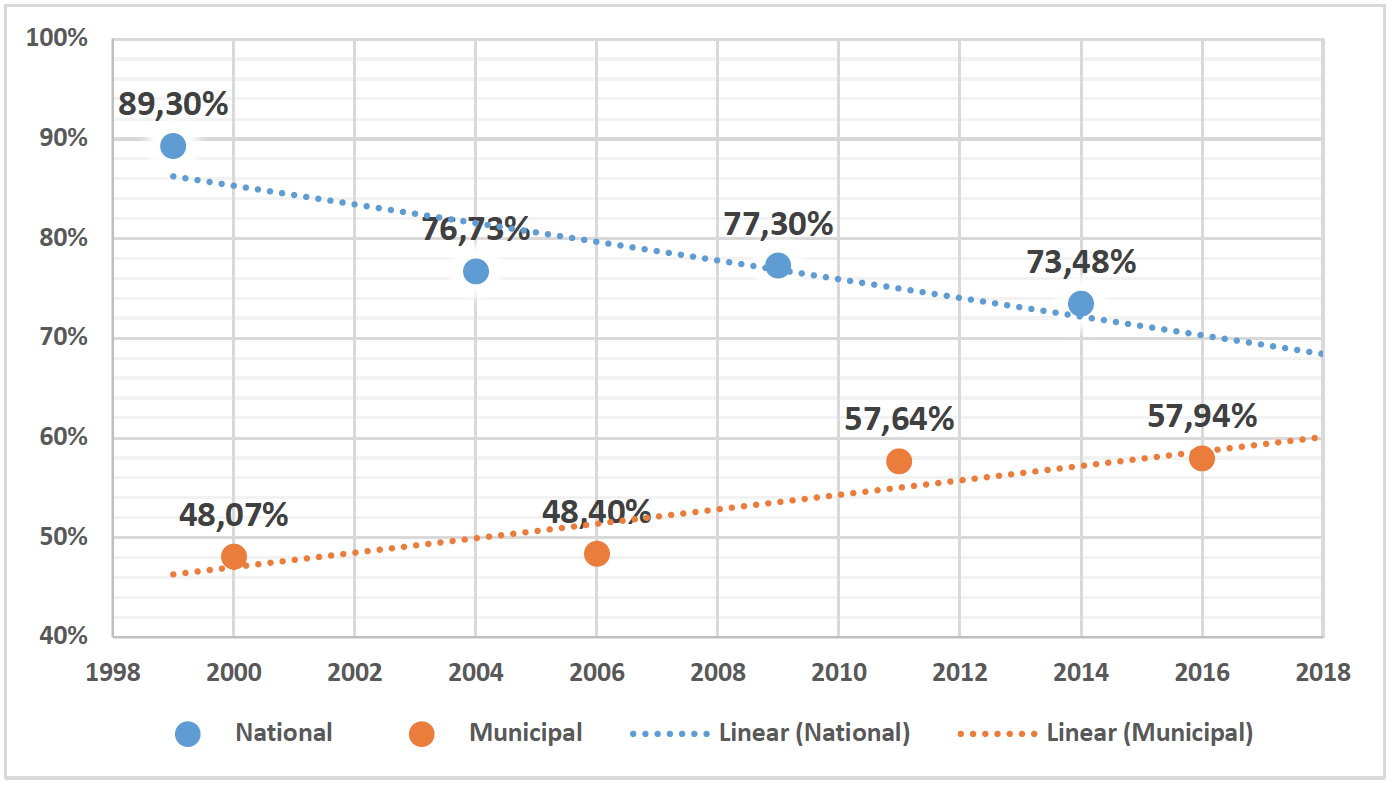 This does not necessarily indicate that South Africans are politically apathetic, as South Africans do participate in other forms of political participation (as shown by figure 3). Of concern, however, is the findings that three in ten South Africans (30.3%) have used, or would use, force or violence for a political cause, and an equal number have or would refuse to pay tax/fees should they get the chance to do so (see figure 3). The high propensity for using force or violence for a political cause is concerning, and on the rise5. 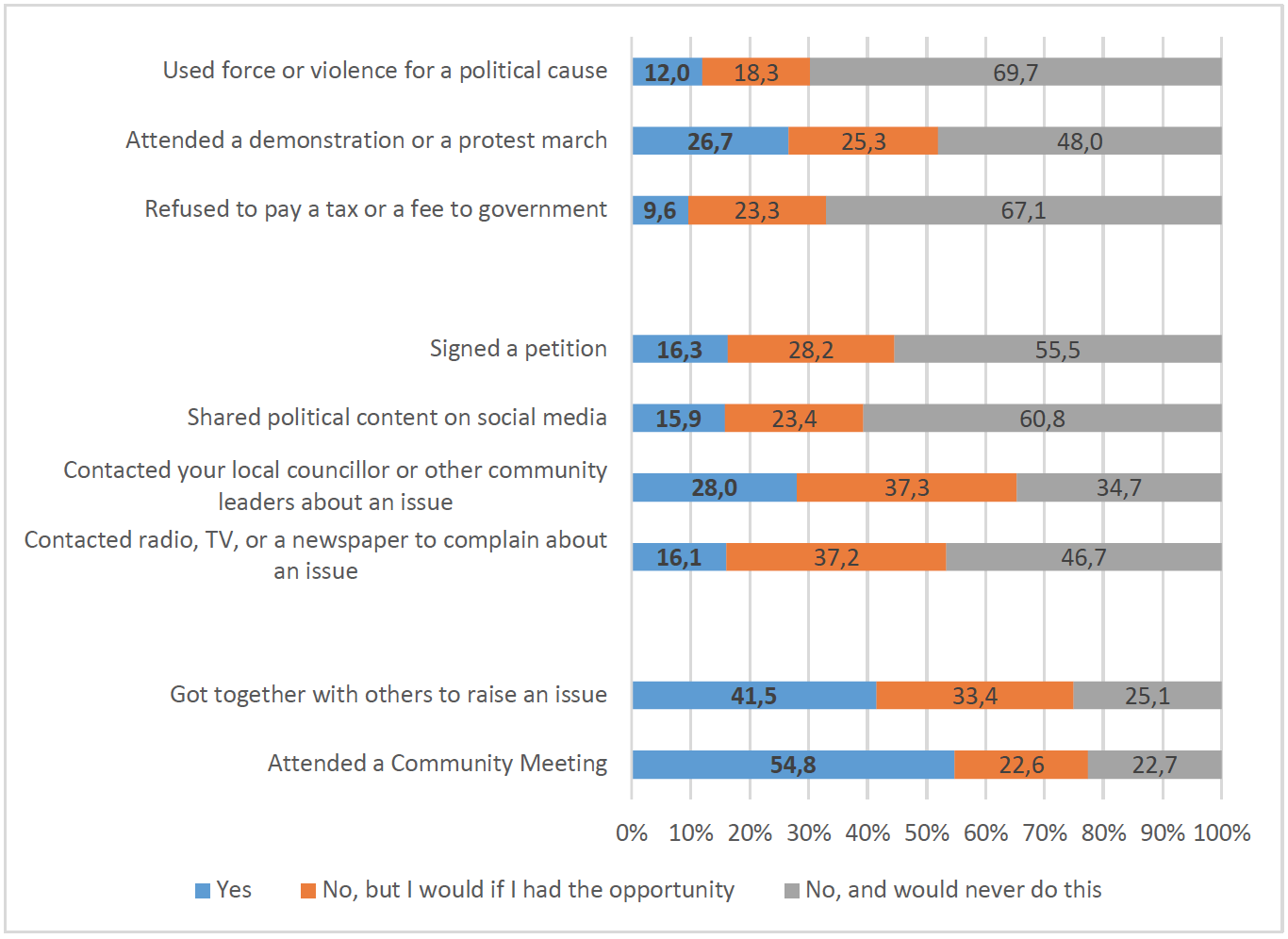 Consideration in the lead up to the 2019 national elections

Almost 25 years since the advent of democracy in South Africa, we need to ask pertinent questions about the consolidation of – and not only transition towards – democracy. Democracy requires more than elections and the right to participate. It requires active engagement and participation by citizens. It requires that government can be kept accountable, that oversight takes places and it requires a responsive government. It also involves the responsibilities of citizens to engage and of society to enable people to participate, as the people who do participate are the ones whose voices can reach policy-makers and policy-decisions. The SARB highlights concerns over voting efficacy levels in 2017, while the perceived constraint to effective political participation (as expressed by citizens) stems not from citizens’ own perceived inadequate capacity to understand and participate in political processes and issues, but rather from the perceived lack of responsiveness of political institutions. This is coupled with the finding that confidence in institutions have declined significantly. In addition, some South Africans do participate (or would participate) in a variety of forms of participation – showing that South Africans are not necessarily politically apathetic. However, the increase in propensity for the use of force or violence for a political cause is of concern, and should be unpacked – in particular within a broader context of decreasing confidence in institutions. As we celebrate Freedom Day in the lead up to the 2019 national elections, let’s think about what can enable political participation, aid in rebuilding confidence in institutions, foster voting and political efficacy – and most importantly, what may help in deepening and consolidating South Africa’s democratic political culture.

Elnari Potgieter is a Senior Project Leader in the Research and Policy Programme at the IJR.

[6] Question reads: ‘Here is a list of actions that people sometimes take as citizens. For each of these, please tell me if you have personally done any of these during the past year. If you have, please tell me how often you have done it. If you have not, please tell me if you would if you had the opportunity or would never do it.’ Response categories include: ‘No, and would never do this’, ‘No, but I would if I had the opportunity’, ‘Yes, once or twice’, ‘Yes, several times’, ‘Yes, often’ and ‘Yes, very often’. All ‘Yes’ responses combined for Figure 3.