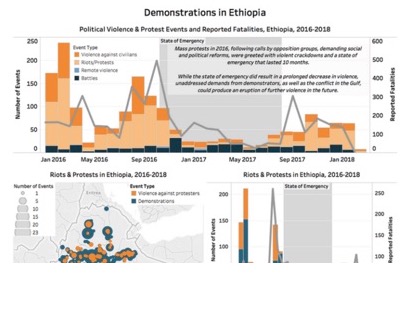 Two African countries experienced a break-up this Valentine’s Day. Two resignations, that of President Jacob Zuma in South Africa and Ethiopian Prime Minister Hailemariam Desalegn. In his televised statement, Desalegn resigned in the public interest, “I want to be part of the solution… I see my resignation as vital in the bid to carry out reforms that would lead sustainable peace and democracy.”

Desalegn’s resignation comes just days after young people organised a three-day social shutdown across several towns in the Oromia region. Although the government had released several hundred prisoners in January, the protesters called for the unconditional release of all other political prisoners held by the government. Ethiopia is at a tipping point, as anti-government protests and demonstrations have increased since late 2015, crippling the country and prompting alarm in the coalition government. According to the Ethiopian Human Rights Commission, at least 669 people have been killed due to clashes with the security forces. Desalegn admitted that Ethiopia was in a critical stage in her history, saying he believed that the public’s demands should be met. For some, his resignation came as a surprise, but others did not take his resignation seriously. There is a general consensus that Desalegn’s resignation was long overdue and a response to the pressure that the protests have applied, despite the combination of brutal crackdowns and some democratic reform. As Ethiopian analyst, Mohammed Ademo states, that this is a momentous transformation and it isn’t a favour from a benevolent vanguard party but the cumulative outcome of years of relentless struggle by democracy activists and the opposition.

Due to historical unaccountability, the collapse of the rule of law, authoritarianism and ethnicisation of the country’s politics, this led to protests. The coalition government needs to rebuild the relationship between the political elite and the public, especially the youth who became frustrated and despondent.

This political crisis presents an important opportunity that the country can recover from, if not missed. But, the day after the resignation, the government announced a state of emergency in response banning protests and publications that “incite violence”, stating that it was vital to safeguard the constitutional order. This is the second time the ruling coalition government has implemented a state of emergency in 18 months following months of curfews, restrictions on movements and the detention of 29, 000 people. The latest state of emergency contradicts the actions taken last month by the government to widen the political and democratic space, by responding to the demands of the people.

The international community heralded this move as a step in the right direction for Ethiopia’s democratic reform process. The African Union (AU) commission chairman, Moussa Faki Mahamat welcomed the decision saying he was encouraged by the government’s “willingness to persevere on this path” of democratic reform. The AU has found itself in a precarious position because its headquarter’s are in Addis Ababa. Ethiopia has long been criticised for its poor human rights record. Moreover, Mahamat recognises that Ethiopia also plays a key role in promoting regional peace and security, as well in the pursuit of the continental agenda. In spite of the international community’s optimism, within Ethiopia, civil society, political organisations and the public remain skeptical.

The discontent with the government has also manifested itself within the coalition government, producing an additional political crisis. The coalition government (Ethiopian’s Revolutionary Democratic Front) consists of four “ethno-nationalist parties”- Amhara National Democratic Movement (ANDM), the Oromo Peoples’ Democratic Organisation (OPDO), Tigrayan People’s Liberation Front (TPLF) and the Southern Ethiopian People’s Democratic Movement (SEPDM). Despite only representing 6% of the population, the TPLF very much rules the roost. Tigrayans dominate key political, economic, security positions, as well as state-owned enterprises. The party has built up a formidable political base. Desalegn did not consolidate his power, in the same way as the deceased Meles Zenawi who had a strong personality and was much more authoritarian. So it is thought a power vacuum was created. He is said to be weak leader lacking in charisma, without political capital and power to transcend the political infighting and disunity in the coalition. This may also have contributed to his resignation. The protestors have forced the government to engage in introspection on the shortage of democracy but also the dire state of the coalition government.

The government has always made the grave mistake of responding to protests with states of emergency as a temporary solution, rather than addressing the protestors’ grievances, and using the opportunity to pursue national dialogue. The protests were driven by members of the Oromo and Amhara population- two of Ethiopia’s largest ethnic groups who make up two-thirds of the population.  Both ethnic groups have expressed different reasons for their protests. For example the Amhara’s protest has been over the disputed territory of Woqaite. Activists claim that large agricultural land was annnexed by the neighbouring Tigray region leading to tensions between the two groups. The activists were later detained in 2016 under Ethiopia’s controversial anti-Terrorism law, which has triggered widespread protests. Both the Oromo and Amhara view Desalegn’s resignation as a victory. They share the demand for greater democracy; respect for human rights; an end to ethnic marginalisation (equal employment and development opportunities); equal representation; and adherence to the rule of law by the ruling Tigrayan elite (who represent 6% of the population). They are angered by the gross under-representation of their groups in the positions of power.

There is a suggestion that a leader from the OPDO, representative of the Oromo people, will become the next PM. This would be symbolically meaningful. However, at this current impasse, Ethiopia needs to dismantle and reconstruct the state institutions based on democratic values inclusive of all stakeholders. This will solve the political crises by creating a comprehensive political dialogue that can manage the polarised views concerning Ethiopia’s future.

Ethiopia needs a leader with a vision that will curb and transcend the ethnicisation of politics; and demonstrate his/her capacity to rebuild the relationship and consensus within the political elite and between the political elite and public. The government needs to work to secure the state through national consensus, which can only be achieved through national dialogue and by widening the democratic space to include all. Ethiopia has been known to have an uncritical citizenry, as Afrobarometer survey in 2013 showed in its analysis of democracy in the country. But something has changed in Ethiopia, especially since 2015 protests started. What we need to engage with is how this happened and what is driving citizens on the ground to show their displeasure. As for the protestors and demonstrators, they need to be convinced that bringing about meaningful political change can take place outside of protests, through exercising and participating in democratic citizenship. A.U Chairperson Mahamat stressed “the need for all concerned stakeholders to display a spirit of responsibility and refrain from any acts likely to undermine peace and stability. These are precious public goods without which neither prosperity nor democracy is conceivable”.  It is of paramount importance that the state responds to national issues and the despondency, especially among the youth, and that democratic reform must not only be done- but seen to be done.