German and Colonial Hypocrisy: “Mysterious Circumstances?” I think not 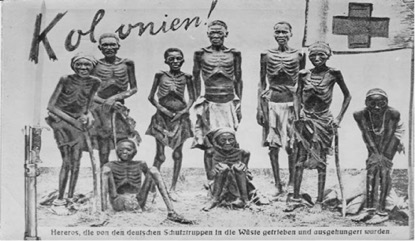 On 31st March 2007, the Namibian government constructed a memorial plaque in remembrance of the indigenous OvaHerero and Nama (not specifically included) peoples. The plaque reads that the Herero (and Nama) people, “perished under mysterious circumstances.” The OvaHerero and the Nama, through this plaque, have been barred from the redress they deserve and it tacitly acquits the German state of all culpability for this crime against humanity.

The reality is that the colonial German state, in an act of pre-meditated malice destroyed the majority of the Herero and Nama people. The descendants of the Herero and Nama descendants have taken the German state to court to ensure accountability for their fallen ancestors and to pursue reparations for the ongoing injustices they have suffered as a result of the genocide.

The German state believes that they are not responsible for the damages and have filled a motion to the New York court to have the case thrown out. On 14 February 2018, the Herero and Nama camp filed an amendment in order to keep the case going.

Back in 1884, following the Berlin conference dubbed ‘the Scramble for Africa’ that carved up the African continent to suit the whims of European colonial power, Germany declared a portion South West Africa. At this point, only a small part of what is now known as Namibia was in the hands of the German colonial state. However, by 1903, the colonial state had taken control of 80% of Herero and Nama land.

During this initial period of colonial conquest, a culture of usury became common, whereby German settlers lent money to the indigenous groups so that they could purchase European commodities. However, this resulted in large amounts of debt, among the local indigenous population, as the money was lent at substantial rates of interest. The German colonists, knowing that these debts would not be monetarily paid, decided to strip them of their cultural and physical wealth. These practices of usury and land expropriation inevitably left these indigenous groups impoverished, dependent on the colonial state and completely dispossessed.

In 1904, a small revolt erupted from the side of the Herero people, later joined by the Nama. The reason behind the frustration was of course land and socio-economic exploitation, but an institutionalised form of European racial discrimination also underpinned it. German colonists believed indigenous black groups were an inferior race and only ‘useful’ for cheap labour. Faced with their progressive demise as a people, the Herero and Nama chose to try and fight for their survival.

As a result, a German military commander Lothar von Trotha arrived with a “vernichtungsbefehl” (extermination order), as he believed that, “leniency towards blacks is cruelty towards whites.” 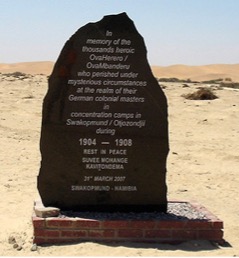 The plaque depicted above is a memorial at an infamous death camp on what was known as Shark Island. Concentration camps were a common tactic of the colonial state. However, the memorial reads that these indigenous groups, “perished under mysterious circumstances.” This memorial is not only a form of insidious propaganda but also a gross form injustice, completely delegitimising the immense struggle and pain that the Herero and Nama people have suffered at the hands of the German colonial state.

In 2015, Herero and Nama descendants, a very small minority now within Namibia, invoked the Alien Tort Statute in the US, and took the German government to court in order to claim for reparations. This action however has been met with resistance, the current German state claims no responsibility for the injustices caused by their colonial predecessors. Furthermore, the descendants and representatives of the Herero and Nama have not been consulted or included in ongoing government-to-government negotiations.  The Namibian government is to benefit from the developmental aid that Germany would prefer to give.

It is questionable whether any additional “aid” that is provided by the German government will benefit Herero and Nama people, it is more likely that the Namibian government might utilise it for ‘mysterious’ purposes.

On the question of reparations, we know that today Jewish Holocaust victims and their families are still receiving payments for those injustices from the German. Through in-depth study, one can see that the horrific tactics used in Nazi Germany were partly derived from the atrocities committed in ‘German South West Africa’, so then if Jewish victims deserve reparations then why don’t the Herero and Nama?

This gross discrimination towards Africa and its people must end; otherwise, this perpetrates the legacy of the multiple crimes against humanity that were committed on the African continent. McCallion & Associates, the legal team representing the Herero & Nama plaintiffs, amended the case on the 14th of February, allowing them to keep the pressure on. This prosecutorial effort is also a test case for the injustices caused by the British, French, Portuguese, Spanish and Dutch colonial regimes in the Global South. Bringing the whole idea of international human rights law into question. The New York Court has an important job ahead of them

I stand behind the Herero and Nama’s claim for reparations.