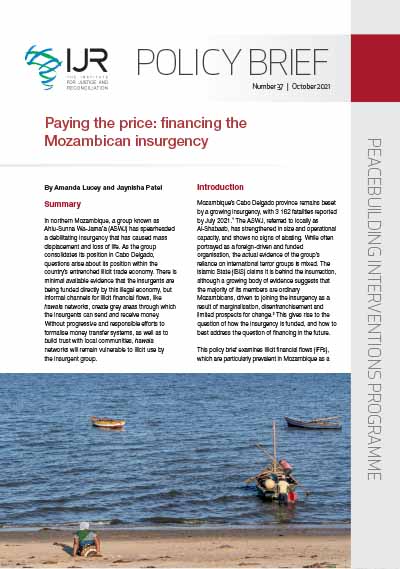 By: Amanda Lucey and Jaynisha Patel
Pages: 12
Dimensions: A4
Date of publication:  2021

In northern Mozambique, a group known as Ahlu-Sunna Wa-Jama’a (ASWJ) has spearheaded a debilitating insurgency that has caused mass displacement and loss of life. As the group consolidates its position in Cabo Delgado, questions arise about its position within the country’s entrenched illicit trade economy. There is minimal available evidence that the insurgents are being funded directly by this illegal economy, but informal channels for illicit financial flows, like hawala networks, create grey areas through which the insurgents can send and receive money. Without progressive and responsible efforts to formalise money transfer systems, as well as to build trust with local communities, hawala networks will remain vulnerable to illicit use by the insurgent group.